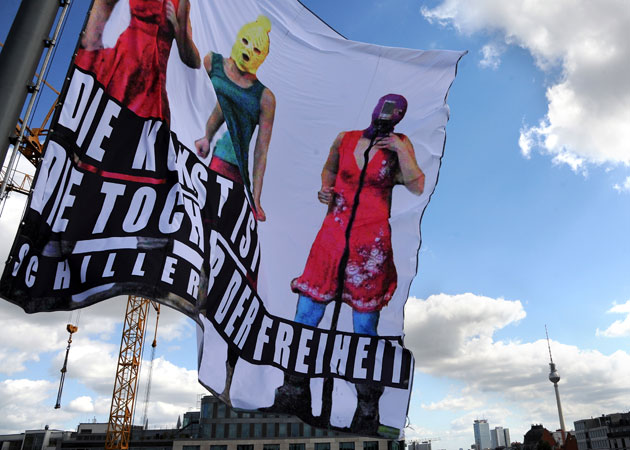 In a surprising turn of events during the Pussy Riot appeal trial today, one of the band members was set free, while the two-year sentences of the other two were upheld by the Moscow City Court.

The court reaffirmed the guilty verdict against all three women on charges of “hooliganism motivated by religious hatred,” but freed Yekaterina Samutsevich. The three-judge panel accepted the argument by her newly hired lawyer, Irina V. Khrunova, that her role in the church protest was not parallel to that of the other two women, because she was seized and taken out of the cathedral before she had time to sing or jump around, according to the New York Times.

As the Times reports, however, the court failed to address the procedural problems with the initial trial:

The judges did not address the numerous concerns that the women and their defense lawyers raised in August — what they called the arbitrary disqualification of defense witnesses, the testimony by so-called victims who were not in the cathedral for the Pussy Riot stunt, the bizarre conflation of alleged moral offenses and violations of the state penal code.

Putin said the three women “got what they asked for,” in a documentary that aired on Sunday.

The other two band members, Nadezhda Tolokonnikova, and Maria Alyokhina, are headed to prison colonies, but their lawyers will continue to appeal, according to the Times, which also notes that the verdict is sure to “intensify, rather than quiet, any debate.”

In a speech during the trial Tolokonnikova predicted the fallout from the Pussy Riot case in wider society: “What is happening now, what is happening during the third Putin presidential term — it unfortunately leads to growing instability,” she said. “I will go away for one and a half years, and a civil war will erupt in the country, because Putin is doing everything to achieve it.”

Here is blow-by-blow live text coverage of the trial from the Russian Legal Information Agency.

Pussy Riot’s appeal trial, which was scheduled for today, has been postponed until October 10, after one of the women requested a new defense lawyer. The AP reports:

As the hearing began Monday, band member Yekaterina Samutsevich unexpectedly announced that she has fired her three lawyers over an unspecified disagreement. Samutsevich said she had found another lawyer but had not yet signed a contract. Her fellow band members said they supported Samutsevich’s choice but would still retain the services of their lawyers.

Olga Mefodyeva, an analyst at the Center for Political Technologies, told the AP the decision may be a way to draw waning international attention to the trial again.

Pyotr Verzilov, the husband of band member Nadezhda Tolokonnikova, downplayed the move. The defense team says the women are “under tremendous pressure, with the government threatening to take away their children,” and Verzilov says Samutsevich’s decision “was simply caused by a change of mood,” according to the AP.

The riot grrrls who walked into Christ the Savior cathedral on February 21st, screamed, danced and asked the Virgin Mary to “put Putin away,” are now locked up in a medieval castle-style detention center in Moscow. Nadezhda Tolokonnikova, Maria Alyokhina, and Yekaterina Samutsevich were sentenced to two years in prison on August 17 on charges of “hooliganism motivated by religious hatred” for their performance protest. An appeals trial is scheduled for October 1st, but no one is holding their breath. Instead, the Pussy Riot team is turning to the international community to try and put pressure on Putin.

The whole world, including Prime Minister Dimitri Medvedev and Russian Human Rights Commissioner Vladimir Lukin, has condemned the absurd sentence. But that doesn’t matter, says Mark Feygin, one of the Pussy Riot defense attorneys, since, as Mother Jones‘ Sydney Brownstone reported, the verdict was basically phoned in by Putin. In court on Monday, the lawyers will point to the breaches of law that occured in Pussy Riot’s initial trial, including barring key witnesses and experts from testifying and preventing defense lawyers from having confidential discussions with the three band members. Alisa Obraztsova, a legal assistant for the defense team, says the court may reduce the sentence by a few months, “just to show that the appeal is working. But we cannot be sure even in this.”

The state is now cracking down on the women’s lawyers too, launching criminal investigations against Feygin and Violetta Volkova for their involvement in May’s anti-Putin protests. The lawyers assume the third member of their team, Nikolai Polozov, will also be targeted. “We estimate this is a sign of pressure from the authorities,” Feygin said through a translator, since he says none of them were involved in any protest-related violence. They fully expect to be arrested after the appeals court decision is handed down next week, but Feygin maintains that “we are not afraid.”

The court may reduce the sentence by a few months, “just to show that the appeal is working. But we cannot be sure even in this.”

The team traveled to the US last week to continue to lobby on behalf of their clients in advance of the appeal trial. Along with Pyotr Verzilov, Tolokonnikova’s husband, their adorable, blond-pony-tailed four-year-old daughter Gera, and Robert Lieber, who runs freepussriot.org, they spent a few days in Washington, DC, and New York meeting with legislators, human rights leaders, and the media to spotlight Pussy Riot’s situation.

While here, they got shout-outs from icons like Aung San Suu Kyi and Yoko Ono. That’s on top of the widespread support they’ve already gotten from all sorts of celebrities from Madonna to Chloe Sevigny.

Endorsements aside, the Pussy Riot team is hoping the force of US and international law might eventually sway Russian courts, even if not this time around. They met up with members of the House Foreign Affairs and Senate Foreign Relations committees, each of which recently approved a bill that would create a list of human rights violators around the world and impose financial sanctions and travel restrictions on them. Obraztsova told Mother Jones that the defense team is hoping Congress will pass the bill, named the Sergei Magnitsky Rule of Law Act after a Russian anti-corruption lawyer who allegedly died from torture, and add prosecutors and judges involved in the Pussy Riot case to the list. Feygin, Volkova, and Polozov also met with White House staff, who will be a harder sell on the legislation, since it could seriously strain US-Russia relations. (The Russian government has promised big retaliation if the bill passes.)

International attention on the case has helped “make the human rights situation in Russia clear to Russians.”

Across the pond, the defense team is already appealing to the European Court of Human Rights, since Feygin says the three see no need to wait for the Russian appeals court ruling which they regard as pretty much decided. And even though the the ECHR may only be able to impose a fine, Feygin says the point is not the penalty, but the spirit of the ruling. “If they rule that the sentence is unlawful,” he says, “it will help bring international condemnation and help to appeal in Russia in the future.”

Feygin says international attention on the case has already helped. Not only in lightening the women’s sentence, he says, but also in helping to “make the human rights situation in Russia clear to Russians.” Verzilov says that there have been plenty of other recent show trials, but “there haven’t been any trials that were watched by the whole world before,” and none have been as clear-cut. He says the Khodorkovsky trial, another politically motivated case, got good attention, but it was about “complex tax issues, and he’s a billionaire…Unlike a case where three girls sing in a church and go to prison.”

So is the Pussy Riot case changing Russia? Russian opposition leader Alexey Navalny has predicted a Russian Arab Spring. Feygin says “society is not ready enough to resist government,” but maintains “the protests for change are unstoppable….The resistance in Russia will be inspired by such people as Pussy Riot, and other political activists fighting the Putin regime. [Eventually] we will finally get to succeed.”

Until then though, the women are most likely destined for grim penal colonies hundreds of miles from Moscow. The ladies who sang in church will be penned in barracks with “murderers and people who’ve sold their kids,” says Obraztsova where “being beaten is part of daily life.” She says that devout female prisoners “don’t understand that Pussy Riot’s performance was political not religious,” and “they are all ready to welcome the girls. We are really afraid for their life.”