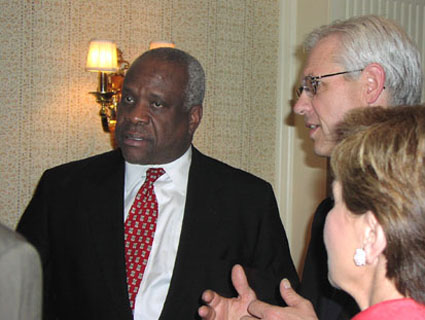 According to a legal analysis by the Congressional Research Service, the Obama administration’s legal reasoning for the form of “due process” required to target and kill a US citizen suspected of terrorism may have been inspired by an unlikely source: Supreme Court Justice Clarence Thomas.

Attorney General Eric Holder gave a speech last March outlining the administration’s legal rationale for when the US is justified in killing its own citizens without charge or trial. “‘Due process’ and ‘judicial process’ are not one and the same, particularly when it comes to national security,” Holder said at the time. “The Constitution guarantees due process, not judicial process.”

Well that legal argument, according to the CRS report first obtained by Steven Aftergood at Secrecy News, “seem[s] to conform more with Justice Thomas’s dissenting opinion in Hamdi, in which Justice Thomas argued that in the context of wartime detention for non-punitive purposes, ‘due process requires nothing more than a good-faith executive determination.'” Hamdi was the case in which the Supreme Court ruled that the US government had the authority to detain American citizens captured fighting for the enemy on foreign battlefields, but that those captured citizens still had the right to challenge their detention. The administration, while publicly defending its targeted killing program, has thus far refused to share the legal memo that justified targeting American citizens suspected of terrorism with the public or even members of Congress.

In 2008, while running for president, Barack Obama told an audience at Pastor Rick Warren’s Saddleback Church in California that “I would not have nominated Clarence Thomas… I don’t think that he was a strong enough jurist or legal thinker at the time for that elevation. Setting aside the fact that I profoundly disagree with his interpretations of a lot of the Constitution.” Well, maybe he doesn’t profoundly disagree with all of his interpretations.