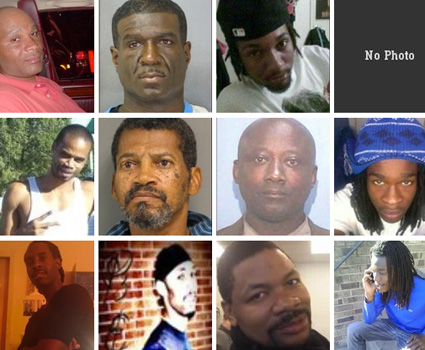 Two years ago, Laura Amico and her husband Chris created Homicide Watch DC, a website that reports on every homicide in the nation’s capital that the two can track down. Visitors can easily look up any recent homicide victim or suspect in the DC metro area, locate incidents on a Google Map, track cases through RSS feeds, and read public records associated to each case. The site gets 330,000 pageviews a month, and its commenting system has been particularly valuable for family and friends of homicide victims looking to ask questions, offer additional information, or simply express their grief.

Homicide Watch’s data-driven approach, combined with Laura’s more traditional style of reporting—she spends most days jotting notes inside court rooms or on the phone with victim relatives—has resulted in a deep historical archive and factchecking tool. Late last December, when the DC Metro Police Department held a press conference to announce a 94 percent homicide closure rate in 2011, Laura thought that number sounded implausibly high. Chris checked their database and found that Homicide Watch records showed 61 arrests made out of 108 incidents in 2011, falling short of MPD’s closure claim. Laura made a few phone calls and determined that the disparity was due to the police department including arrests made prior to 2011* in their count (a practice also used by the FBI).

Laura posted about the MPD’s crime counting method, and two months later, the Washington Post published an investigation that reached the same conclusion. “We were able to turn that story around in two hours because we had the data,” Chris says.

Sadly, Homicide Watch may soon be facing its last day.

Since launching the site two years ago, Laura and Chris have collected 199 incidents of homicide, detailing 147 suspects and 202 victims, and they’ve uploaded 366 documents to the Homicide Watch database. But without long-term financing, they can’t keep the project going. Laura, a long-time crime reporter, has been working on the site full-time, while Chris, a software developer, helps out on nights and weekends. The couple lived off Chris’s salary from his day job at PBS Newshour and then at NPR.* Now, Laura has accepted a Nieman Fellowship at Harvard to study sustainable models for crime journalism, and the site is running out of time.

At first, they tried selling the site to newspapers and universities in DC to keep the project going independently. “The response we got from a lot of people was, ‘It’s great that you guys are doing this, but we never could,'” Chris says.

This week the couple launched a Kickstarter campaign to raise $40,000. The plan? Hire five journalism students (with pay!) and train them to carry on the reporting that thousands of people in DC came to depend on.

I ask Chris about Plan B. “This is the backup plan,” he responds. “This is really the last resort.”

Read more about their plan here, and watch their Kickstarter video below.

*Previously this post stated that Chris Amico works at PBS Newshour. Though he worked at Newshour in 2009 when the couple started Homicide Watch, he moved to NPR in 2011. The text has been corrected.