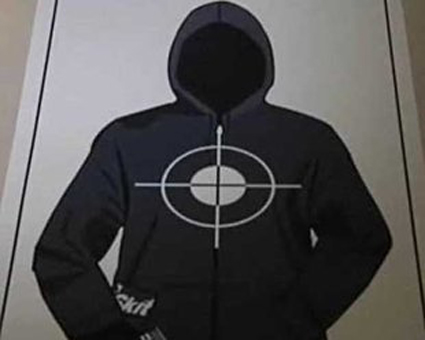 There’s a new low in the highly charged Trayvon Martin case. According to a report from Florida TV news station WKMG, an unidentified entrepreneur aimed to profit by selling paper gun targets depicting the unarmed teenager slain in February. The targets, which were advertised for sale online until Friday, feature a hoodie with crosshairs over the chest—the place where George Zimmerman shot Martin at point-blank range. While there’s plain black in lieu of Martin’s face, tucked into the hoodie’s arm are a bag of Skittles and can of iced tea like the kind Martin was carrying on that fateful night.

An advertisement for the targets had been posted on a popular firearms auction website, according to WKMG, in which the sellers stated that they “support Zimmerman and believe he is innocent and that he shot a thug.” In an email exchange with WKMG reporter Mike DeForest, the seller acknowledged: “My main motivation was to make money off the controversy.” The ad reportedly has since been removed, but the seller told the Flordia news station that the response was “overwhelming” and that the targets were “sold out in two days.” Customers included two Florida gun dealers, he said.

Mark O’Mara, Zimmerman’s attorney, offered condemnation in an interview with the TV station. “It’s this type of hatred—that’s what this is, it’s hate-mongering—that’s going to make it more difficult to try this case,” O’Mara said.

A Huffington Post report linked to a cached version of a GunBroker.com web page (the link now appears to be broken) belonging to a seller named “hillerarmco” from Virginia Beach, Va., which showed the paper targets being sold in packs of 10 for $8. The product description read:

Everyone knows the story of Zimmerman and Martin. Obviously we support Zimmerman and believe he is innocent and that he shot a thug. Each target is printed on thick, high quality poster paper with a matte finish! The dimensions are 12″x18″ ( The same as Darkotic Zombie Targets) This is a Ten Pack of Targets.

Meanwhile, Martin’s mother, Sybrina Fulton, has appeared in a poignant new gun control video rolled out for Mother’s Day in which she advocates against Stand Your Ground, the Florida self-defense law which allowed Zimmerman to walk free for six weeks before he was eventually charged with second-degree murder. We’ll have much more on Stand Your Ground laws—now on the books in various forms across 25 states—in our forthcoming July/August issue of Mother Jones; in the meantime, catch up on essential background and developments in the case with our comprehensive Trayvon Martin explainer.