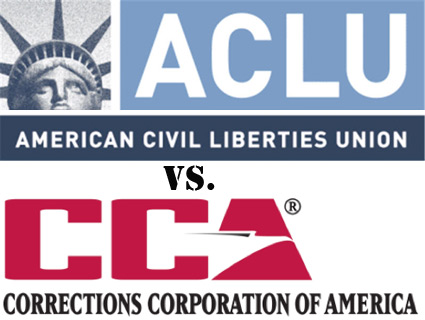 The American Civil Liberties Union has invited the leader of the nation’s largest private prison enterprise, Corrections Corporation of America, to a public debate on the merits of prison privatization.

The organization’s May 8 letter to CEO Damon T. Hininger notes that CCA “has repeatedly criticized the views of the ACLU regarding for-profit incarceration. If you truly believe that private prisons are right for our country, we see no reason why you would be unwilling to defend that position in a public debate.” The letter, signed by David Fathi, director of the ACLU’s National Prison Project and David Shapiro, a staff attorney, goes on to suggest that Hininger debate Shapiro for 90 minutes “at a mutually agreeable time and public venue.”

Of course, the challenge is largely a publicity stunt, but it’s a cogent one considering that CCA performs a public function, gets most of its revenues from the government (see chart below), and yet is relatively free from public accountability: “Exempted from the Freedom of Information Act,” notes an ACLU press release, “CCA and other private prison companies are shielded from public scrutiny by a veil of secrecy, despite locking up nearly 130,000 prisoners and an additional 15,000 immigration detainees each year while receiving billions of taxpayer dollars.'”

CCA also has resisted shareholder initiatives meant to increase the transparency of its operation. As we reported last week, Alex Friedmann, a former inmate of a CCA facility, introduced a resolution demanding that the company report back to shareholders on its efforts to reduce prison rape. (Although Friedmann’s resolution was voted down at last Thursday’s CCA board meeting, he reports that it got 18 percent of the shareholder votes. He says he will introduce more such resolutions in the future.) An earlier resolution aimed at creating accountability for political contributions was also nixed.

The ACLU, which last year released a scathing report on the work of private prison companies more generally, also points to CCA’s history of meddling in public policy. It cites a letter CCA sent this winter to public officials in 48 states, “announcing what it called a ‘corrections investment initiative,’ wherein CCA offered to purchase prisons from states so long as CCA gets to run them for at least 20 years, they contain at least 1,000 beds, and they stay at least 90 percent full.” CCA has also employed hundreds of lobbyists, and until recently had a seat on the American Legislative Exchange Council (ALEC), which drafts model laws.

A robust debate on this important issue is already happening every day among federal, state and local leaders working to solve the very real corrections and detention challenges facing our nation. We understand and appreciate that partnership corrections is one of a number of solutions being considered and implemented around the country, and we are proud of the role we play in helping our partners, taxpayers and the inmates and detainees entrusted to our care. As for a political-style debate, I think we can agree that there’s enough gamesmanship and gimmickry to go around in an election year without adding to it. CCA’s 17,000 dedicated employees —including corrections officers, chaplains and teachers—will continue to work hard every day to provide safe, affordable solutions to our government partners and humane treatment and quality rehabilitation programming to those entrusted to our care.

“CCA continues to hide behind soundbites and prepared statements rather than face its critics in an open debate,” the ACLU’s David Fathi counters. “They call it gamesmanship and gimmickry; we call it getting at the truth.“