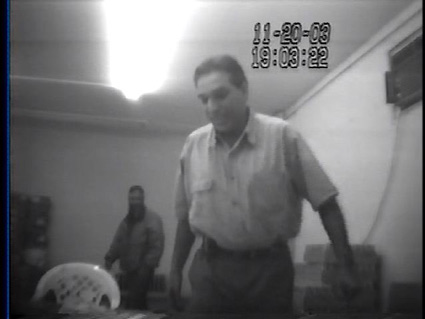 Shahed Hussain, a long-time FBI terrorism informant Mother Jones profiled last year, has surfaced again—but this time, Google appears to have foiled his effort to identify a new target. Khalifah al-Akili, a 34-year-old Pittsburgh man, says he was approached by Hussain and another informant in January. Al Akili told the Albany Times-Union that after Hussain “repeatedly made attempts to get close” to him, he googled them. He found Trevor Aaronson’s August 2011 Mother Jones expose about the FBI’s massive network of undercover terrorism informants and confronted Hussain on the phone. After al-Akili explicitly asked if he was an informant, Hussain hung up the phone. Now al-Akili awaits trial on a gun charge (but no terrorism charges).

Al-Akili says became suspicious of Hussain because he was friendly, dropping in at al-Akili’s house and, after al-Akili lied that he had a sick family member, dropping off a get-well card.

Hussain’s involvement in two previous FBI counterterrorism cases led to convictions: James Cromitie, a 45-year-old former Walmart stocker from Newburgh, New York, was sentenced to 25 years in the headline-making Bronx synagogue plot. Yassin Aref and Mohammed Hossain of Albany, New York, an imam and pizza shop owner respectively, were each sentenced to 15 years for, among other charges, conspiracy to provide support to a terrorist organization with which Hussain claimed to have connections.

Hussain became an informant in 2002 after the FBI caught him helping people cheat on DMV tests. For his work in the Cromitie case, Hussain earned almost $100,000. Mother Jones contributor Trevor Aaronson investigated the FBI’s informant-led cases, including those involving Hussain, for more than a year; he found that in a number of cases, “the government provides the plot, the means, and the opportunity.”

Even with the publicity surrounding the Cromitie and Aref cases, Hussain seems to have utilized a tried and true formula in his conversations with al-Akili—claiming he was in the import business, knew people in a terrorist group, and wanted to talk jihad. “He said to me: ‘My people are involved in the jihad, I lived on the border of Afghanistan,’ trying basically to entice me. I said, ‘May Allah give peace to those people.’ He just continued to want to try to take the conversation in that direction…The people he entrapped were either extremely naive or stupid.”

In previous cases, Hussain has admitted that he would often initiate conversations about jihad when seeking out new targets. At Cromitie’s trial, Hussain described his approach: “I was finding people who would be harmful, and radicals, and identify them for the FBI.”  Aaronson’s article includes this conversation from 2008, when Hussain told Cromitie he was a part of a Pakistani terror group:

“Do you think you are a better recruiter or a better action man?” Hussain asked.

“My people would be very happy to know that, brother. Honestly.”

Though there are no terror charges in the al-Akili case, the FBI says it discovered “jihadist literature and books on U.S. military tactics,” at al-Akili’s house. The FBI claims that al-Akili was recorded talking about the fact “that he was developing somebody to possibly strap a bomb on himself” and according to the Pittsburgh Post-Gazette, the FBI maintains that al-Akili “expressed sympathy for the Afghan resistance movement in a 2005 conversation with a man he knew in prison.”

Al-Akili himself says this type of thing has happened before. “This is not the first situation that I’ve had involving the FBI attempting to entrap me…I stand out here in Pittsburgh because I do follow a more traditional role of Islam. They feel I pose a threat. I’ve never, ever said that I would do anything against America nor do I hold these beliefs,” he told the Times Union.