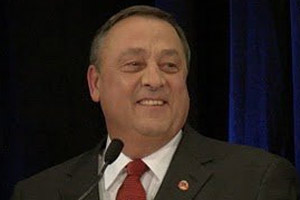 “I’m going to ask the Legislature to allow us to do what every truck driver in the United States of America has to do, take a random test,” he said. “I think if we’re going to take our own limited resources, we ought to be able to test ’em on occasion.”

The comments came at a business chamber breakfast in Jay, where LePage gave an overview of accomplishments from the last legislative session and previewed some of his goals for the new year.

Never mind that random drug testing might be illegal:

Robyn Merrill of Maine Equal Justice, which provides legal services for the poor, said random drug-testing programs in other states have been found to be unconstitutional. She said that’s why a bill that would have required random drug testing for MaineCare recipients did not pass earlier this year.

“Random drug testing is very questionable legally with respect to constitutional issues,” she said. “If the government has the right to drug-test people based on receipt of aid from public assistance programs, what is to stop the government from requiring drug testing for anyone who receives a student loan or any other government benefit?”

Over two dozen states have proposed drug testing for people who receive government assistance. In Florida, for instance, Gov. Rick Scott signed a bill in June requiring state welfare recipients to undergo—and pay for—drug-testing urinalysis before receiving their benefits. If beneficiaries pass the test, the state reimburses them for the cost of the test.

But just two weeks back, a federal court court smacked down the law, ruling that it amountd to an unreasonable search in violation of the 4th Amendment. Legally speaking, it doesn’t bode well for LePage.