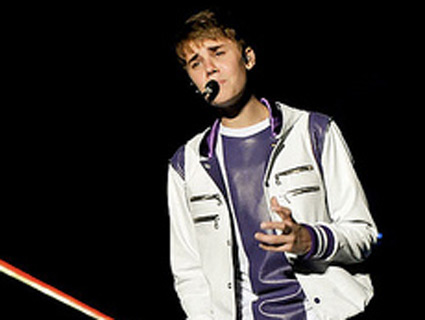 It seems tweeny-bop sensation Justin Bieber wants to be taken seriously as a policy wonk. During an radio interview on Friday morning, Bieber came out against the Commercial Felony Streaming Act, or S.978, a bill that three senators proposed in May that would make unauthorized online streaming of copyrighted material a felony, punishable by up to five years behind bars.

This law could also affect anybody who covers or remixes a popular song and uploads their work to YouTube. On DC’s Hot 99.5 FM, Bieber singled out Minnesota Sen. Amy Klobuchar, a co-sponsor of the measure and a member of the state’s Democratic-Farmer-Labor Party. “Whoever she is,” said Bieber, “she needs to know that I’m saying she needs to be locked up—put away in cuffs.”

“People need to have the freedom,” the pop star continued. “People need to be able to sing songs. I just think that’s ridiculous… I check YouTube all the time and watch people singing my songs. I think it’s awesome. (Here’s an audio clip of the interview.)

As much guff as J-Beebs gets for recording dreadful music and looking exactly like countless lesbians, there is something to be said about his assessment of the proposed legislation. Setting aside the militant call to summarily throw a tremendously popular lawmaker in the slammer, he’s actually right. The Commercial Felony Streaming Act is terrible legislation and even worse politics. Though its sponsors maintain that the bill is designed to target websites and people who profit from streaming copyrighted content, the vague language of the bill leaves the door open for prosecuting the Numa Numa Guy for a felony.

In an era of viral videos and overnight Internet crazes, the bill—which has been endorsed by the Obama administration and (predictably) the MPAA and unions like the American Federation of Television and Radio Artists—is at best unenforceable and unnecessary.

The bill “supports the one-sided perspective of copyright in the digital age held by some corporate rights holders, as opposed to embracing the ecumenical perspectives of all copyright stakeholders, including users, the public at large, and those who would create new works from pre-existing material,” wrote Lateef Mtima and Steven Jamar, two Howard University law professors, in a statement on behalf of the technology advocacy group Fight for the Future.

If Democratic politicians want to keep courting the youth vote, it’s probably a good idea for them to stop trying to obliterate YouTube.