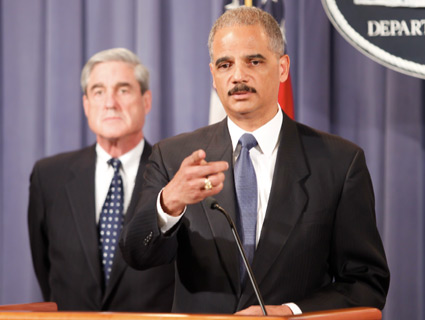 The assassination was never going to take place. On Tuesday, FBI Director Robert Mueller described Iranian American Mansour Arbabsiar’s alleged plot to assassinate the Saudi Ambassador to the United States as straight out of a “Hollywood script.” In a sense he was right—because the plot was controlled from the beginning by the FBI. According to the criminal complaint, when Arbabsiar traveled to Mexico in May 2011, to allegedly find an assassin from the ranks of Mexican drug cartels, he ended up talking to a paid DEA* informant who dodged drug charges in exchange for cooperating with authorities. In keeping with previous sting cases, the FBI was careful to record statements from Arbabsiar dismissing the possibility of numerous civilian casualties, something that makes an entrapment defense all but impossible to mount.

The US thinks Iran is responsible. The criminal complaint states that Arbabsiar believed his cousin, Ali Gholam Shakuri, was a member of the al-Quds Force, an elite faction of Iran’s Revolutionary Guards. Under interrogation, Arbabsiar allegedly identified two men who were “known to the United States to be senior members of the Quds Force,” one of whom allegedly met with Arbabsiar and Shakuri in Iran to discuss the operation. Despite the al-Quds Force’s reputation for lethal effectiveness however, Arbabsiar and his cousin don’t come off as any more competent than the average target of an FBI sting. They discuss the plot in ham-handed “code” in telephone conversations, and Shakuri allegedly wires $100,000 to an American bank controlled by the FBI. That’s not exactly the kind of subtlety you expect from an “elite unit” made up of Iranian Revolutionary Guard’s “most skilled warriors,” a group so effective that attacks in Iraq were attributed to them on the basis of their lethality and sophistication. (Iran’s government has denied involvement.)

So much for Miranda rights halting interrogation. Arbabsiar was arrested in late September, but he wasn’t brought before a judge until Tuesday. That’s because when he was arrested at the airport upon returning from another trip to Mexico, he “knowingly and voluntarily waived his Miranda rights and his right to speedy presentment.” Not only did he cooperate with interrogators, he flipped and implicated his cousin Shakuri by calling him and discussing the plot while the FBI was listening in. And all without waterboarding.

So, about targeted killing… The New York Times‘ Charlie Savage recently reported on the contents of the legal memo authorizing the targeting of recently killed radical cleric Anwar al-Awlaki, which concluded that “Mr. Awlaki could be legally killed, if it was not feasible to capture him, because intelligence agencies said he was taking part in the war between the United States and Al Qaeda and posed a significant threat to Americans, as well as because Yemeni authorities were unable or unwilling to stop him.” Iran could make similar arguments about the Saudi ambassador if they felt so inclined, if they wanted to justify the plot, true or otherwise. All of which is to say that those rules may not be enough of a framework to prevent a future in which other countries that acquire drone technology decide to use them to eliminate their stated enemies as frequently as the US does.

*An earlier version of the piece identified the informant as an FBI source; the informant was with the Drug Enforcement Administration.