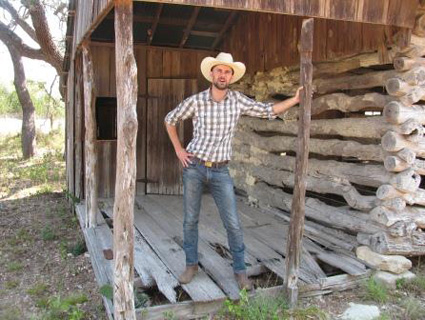 The author at the old Blasingame cabin

Greetings from Texas! I’ve been staying on my family’s ranch in the heart of the Lone Star State for about two weeks now, and I already have about a month’s worth of chigger bites—the little terrorists love the mulch on the vegetable garden, which I’ve been frantically laying with drip lines. As the river runs dry and wildfires rage, I’m starting to doubt Gov. Rick Perry’s Prayer for Rain will seed the clouds. As for his prayers about the Republican presidential primary, who knows? The Lord works in mysterious ways.

I’ve dropped in from San Francisco for two months to write about Perry and other outsized characters from the state where I grew up. And the ranch—located in the Hill Country at the confluence of the Blanco River and Blasingame Creek—is the perfect staging ground, equidistant from Austin and San Antonio as well as Dallas and Houston. Downsides include the half-hour drive to find organic greens or crusty bread, and internet that’s slower than the armadillo living under the rusty ranch truck. But sometimes distance gives you perspective. For instance, I’ve been thinking a lot recently about the decaying log cabin out past the chicken coop and the beehives. It embodies a tale that’s alternately presented either as a cold-blooded crime or one of the region’s most famous showdowns. How you think about it might depend on your politics.

In the 1854, the family of Woodson Blasingame, a low-income subsistence farmer, built the cabin on land purchased from James Callahan, a land speculator and captain with the original Texas Rangers. Blasingame is thought by some to have sympathized with the area’s progressive German community, while Callahan, the namesake of Callahan County, was a swashbuckling good ‘ol boy best known for nearly causing another war with Mexico. “It took a lot to make him angry,” says Tom McDonald, Callahan’s great-great-great grandson, who is writing a book about him, “but when you did, you’d better get out of his way.”

In late 1855, Callahan and a posse of nearly 100 Rangers pursued a band of Lipian Apache Indians out of the Hill Country and across the Rio Grande into Mexico. The Indians joined forces with local Mexicans and ambushed him, killing four of his men. The Rangers fought their way out and occupied the nearby Mexican town of Piedras Negras, where they looted food (and gold, according to one account) before burning it down and fleeing back across the border. The raid was widely praised in the local press, where it fed into support for the “Know Nothings,” a nativist antecedent to the tea party. However, one progressive German-American paper in the area opposed it as illegal.

When the men returned, Blasingame, one of whose sons did chores for Callahan, told friends that the captain was just out to “plunder” Piedras Negras. Word made its way to Callahan, who told Blasingame’s son that his father should meet him immediately for a duel. Two hours later, Callahan showed up at the cabin with three armed men on horseback. The Blasingames stayed inside. Shots rang out from both sides, riddling the cabin with bullets and killing Callahan and a friend. Blasingame and his son surrendered to the authorities, but soon afterward, an angry mob pulled them out of captivity and emptied their pistols into them.

There are a number of reasons why the cabin has been on my mind as of late. For one thing, I’m wrapping up a story about FBI informants in Texas in which truth easily gets colored by political perception. But no matter who fired the first shot at the cabin, the story is a reminder that Texas has long been divided along lines of race and class, susceptible to demagoguery and vigilantism, and dominated by powerful men who often put their own interests above all else. The only difference today is that the people waving flintlock rifles (and threatening secession) are Republicans with national political ambitions. Texas, for better or worse, justifiably or not, has become a right-wing political meme.

The true meaning of being Texan is something I hope to tease out during my two months back home. There’s nothing necessarily ideological about the Texan predisposition to stand and fight. Like Blasingame, I too have a gun. Not that it would do any good against the guy with the AK-47 who may or may not like my story about him in our September/October issue. It’s the thieving rabbits in the organic vegetable garden that I’m after. They’re so damn good on a spit.