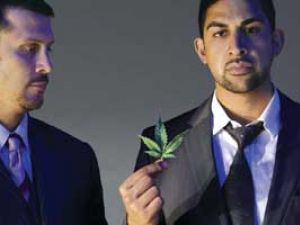 Dhar Mann and Derek Peterson, the “ganjapreneurs” I recently profiled, are breaking up, and boy, it’s an ugly divorce. A few months ago, the duo behind weGrow, a high-profile Oakland hydroponics store, was dreaming of venture capital, IPOs, and their own reality TV show. Now they’ve split amid accusations of unpaid debts and financial shenangians.

“This was a fucking hydroponzi scheme, for a lack of a better term,” Peterson told me yesterday, “and it shouldn’t be. It’s got so many legs. We can make legitimate money here.” He accuses Mann of misleading him about weGrow’s financials, refusing to reimburse him $50,000, and failing to pay vendors and employees. Last week, Peterson and his wife filed lawsuits against Mann. A spokesman for Mann said that Peterson is trumping up the allegations in retaliation for Mann’s recent decision to wind down their partnership. Mann told me that he plans to sue Peterson to recoup weGrow shares and more than $75,000 in unpaid bills.

Founded by Mann early last year, weGrow was the country’s first “out of the closet” hydroponics store, unashamed to openly advertise that it sold products for pot growers. Mann, the Lamborghini-driving scion of a well-connected Oakland taxi dynasty, and Peterson, a Morgan Stanley investment banker, brought financial know-how and political clout (and a lot of swagger) to a business plan that would have created the country’s first publicly traded, vertically integrated marijuana company.

Now it’s all falling apart. The original Oakland weGrow store closed last week, though Mann says it’s becoming a distribution center for the store’s franchises, the first of which recently opened in Sacramento. Peterson says that he still plans to take his own company, GrowOp, public later this year and may create his own chain of hydroponics stores to compete with weGrow.

Mann and Peterson’s flameout seems to have more in common with infighting at a tech startup than the schism between La Familia and Los Zetas. In an effort to capitalize on California’s $14 billion-a-year marijuana boom, they may have bitten off more than they could chew. “They are cocky and pushing too hard too fast,” as a financial consultant for marijuana companies presciently told me. Ultimately, their meltdown is another interesting case of growing pains for the medical marijuana industry as it moves from the underworld into the slippery embrace of Wall Street.