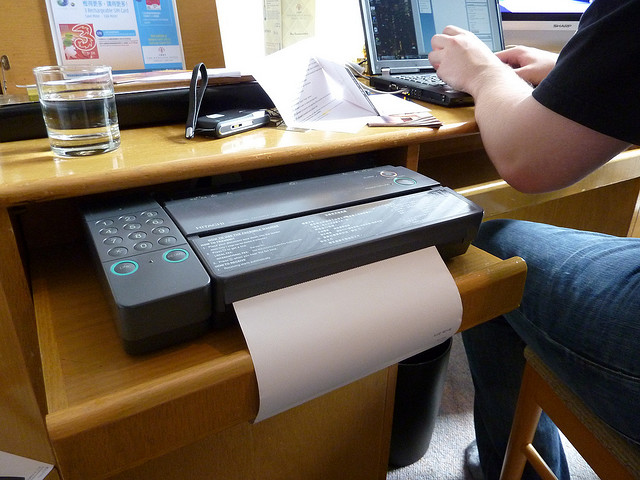 [WARNING: Verbal descriptions of the faxed death threats and linked images of them include offensive language and images.]

Earlier today, TPM broke the news of a death threat sent to Rep. Betty McCollum (D-Minn.), apparently responding to her effort to end the Pentagon’s $7 million endorsement deal with NASCAR. Laced with racial and gender profanities and festooned with a logo of an American pickup truck dragging the head of President Obama by a noose, the fax declared: “Yo! Slut Betty SHUT YOUR PHUCKING PIE HOLE! Without exceptions, Marxists are enemies of the United States Constitution! Death to all Marxists! Foreign and Domestic!”

As horrible as it was, it may not be the first time this phantom faxer has struck. When we at Mother Jones posted a copy of the McCollum death threat to our Tumblr, a fellow blogger, Pantsless Progressive, pointed out that it bore striking resemblances to an earlier threat sent here in the Golden State. (Another Tumblr user, idroolinmysleep, tipped us off just moments later, too.) “California State Senator Leland Yee received a nearly identical fax on January 26,” PP wrote.

The images don’t lie: PP and idrool were clearly correct.

Late last month, Yee (a San Francisco mayoral hopeful) launched a public campaign against Rush Limbaugh’s radio show after the right-wing host mocked Chinese speakers. One week later, he received a fax with the same racist logo as McCollum’s (as well as a tagline that’s not worth repeating here). The fax read: “Achtung! Fish Head Leeland Lee Rush Limbaugh will kick your Chink ass and expose you for the fool you are,” then the familiar lines: “Without exceptions, Marxists are enemies of the United States Constitution! Death to all Marxists! Foreign and Domestic!”

Only further investigation will reveal the full facts, but it certainly appears that there’s someone out there who’s serially threatening Democratic politicians with death. Alternately, the McCollum perp could be a copycat, but that would still suggest someone who’s familiar with San Francisco/California politics. We trust the Capitol Police, who are investigating the McCollum incident, and other authorities will do their utmost in getting at the bottom of this. And in the meantime, we thank Pantsless Progressive and idroolinmysleep for making the connection. It’s a credit to social media and our many readers out there that they can contribute reporting like this, of a significant public-safety interest. Perhaps crowdsourcing can help find the perpetrators, too.