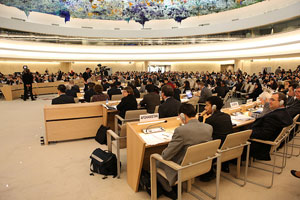 In November 2003, 54-year-old Gary Ridgway admitted at his trial for first-degree murder that he was indeed the Green River killer, the long-sought culprit behind the murders of 48 women, mostly street prostitutes. Nearly all his victims were strangled in Seattle, Washington, from 1982 to 1984. His unapologetic statement to the court read, “I picked prostitutes as victims because they were easy to pick up without being noticed. I knew they would not be reported missing right away and might never be reported missing… I thought I could kill as many of them as I wanted without getting caught.” (PDF)

In early November, a trans woman ex-sex worker who’d worked in Washington, DC (who we’ll call Regina to protect her identity) and a 20-year sex worker rights advocate named Penelope Saunders appeared at the Palais des Nations in Geneva to lobby UN delegates reviewing the US’s human rights record. Holding a report (PDF) assembled by an international coalition of advocacy groups, Regina and Penelope tried to talk ambassadors from Columbia, Australia, New Zealand, and 12 other countries into recommending that the US dismantle its anti-prostitution policies. The report suggests that all mandatory minimum sentencing guidelines for those arrested under prostitution charges should be repealed. And that sex workers arrested and charged under prostitution laws should have their records cleared. Support services like education, job training, and healthcare should replace criminal charges, it adds.

“Arrests for sex work,” the report explains, “can lead to a cycle of continued exclusion from housing and other job opportunities, and to re-imprisonment.” And since sex work in the U.S. is treated as a crime, “law enforcement officials frequently fail to recognize that sex workers can be victims of crime, and thus deny justice or support to sex workers who seek their help.

Law enforcement officials frequently fail to recognize that sex workers can be victims of crime.

Denying help is just the start: “You’d be surprised how many policemen I had sex with,” Toni Collins, co-founder of D.C.’s Transgender Health Empowerment told Amnesty International in a report on police abuse against gay, lesbian, and transgender people in the US. “They’d say, ‘You do it with me, or I’m going to arrest you for prostitution.’ Then they’d tell me to go home and I better not tell anybody.”

“I think it’s really hypocritical to say that some people deserve protection from violence and others don’t,” Regina says. “That’s a really classic thing we use toward any group we don’t like.” Mother Jones caught up with Regina on Skype and Penelope over email to talk about Geneva, feminism, and what decriminalized prostitution in the United States could look like.

Mother Jones: How was Geneva?

Regina: We had a lot of great conversations. I don’t think anybody blew us off. Everyone at least listened to us and took the information and said they would consider it… Countries from Latin America were the most interested and more engaged. At the end, Uruguay did make a recommendation to the United States about the need to address the special vulnerability of sex workers to violence and human rights abuses. It was interesting because they put that phrase in with some recommendations about LGBT people… November 20 was Transgender Day of Remembrance and, how many of the people who are remembered who are killed,

You don’t have to arrest people to stop having used condoms on the sidewalk.

are mostly transgender women of color who have been involved in sex work?

MJ: Did any of the delegates say anything that really stuck out for you?

R: We had a really good conversation with Colombia. They had just had a Constitutional Court decision that recognized the right of sex workers as workers and as individuals, to the point of saying that there’s an explicit contract between a sex worker and a client when they make an agreement about something. That’s really powerful. I don’t think any country has gone that far.

MJ: A lot of advocacy groups came together to create the report on abuse faced by sex workers for the Universal Periodic Review, which reviews the human rights records of its 192 member states once every four years. What do you hope your report and recommendations will accomplish policy wise?

PS: This is the first time that I know of that the international community has asked the US about its record on sex workers’ rights. This gives advocates within the US an opportunity to speak to US policy makers and raise all the issues highlighted in the report. It’s a very positive opportunity because rather than advocates reacting to poor policy proposals made by the US (such as the anti-prostitution pledge) it means that advocates can be pro-active and say to the US, “what will you do to improve the lives of sex workers, people in the sex trade, and people profiled as such?”

MJ: Could you describe how decriminalization would affect sex workers’ lives in the US?

PS:? Removing laws against prostitution is one part of a broad campaign for sex workers’ rights. In Arizona, people convicted on prostitution related offenses are incarcerated on the first offense. Obviously this dramatically affects people’s lives. In other places, people face mandatory HIV testing when they are arrested for prostitution related offenses and if they test positive face felony charges and other repercussions. This violates human rights standards and undermines health initiatives.

R: I often hear people say, “They’re out on the corner all night and they’re used condoms on the sidewalk,” and whatever. And it’s like, if we were in a different context those problems could probably be solved without needing to arrest people. You don’t have to arrest people to stop having used condoms on the sidewalk. Sometimes the negative affects of the work sex workers do is a result of criminalization and stigma. If the environment for it were a little bit different maybe we wouldn’t have some of the same problems.

For folks directly affected by anti-prostituion laws right now, who actually exchange sex or sexual services for money as opposed to the simulation of it, I think a model where they can work safely, where their informal contract will be recognized and validated and respected, so that if someone abuses them during the contract they have some recourse, a model where they can get services, where police will take violence against them seriously, that’s what should be used. How that looks exactly I’m not sure. But local sex workers need to be at the table and leadership of whatever policy changes there are.

Seventeen or 18 percent of sex workers reported violence, especially sexual violence from the police towards them. Those people were more likely to be transgender and also more likely to be migrants. The violence committed by police and other law enforcement … It’s usually ignored. Police won’t take violence against them (whether by pimp or whomever) seriously because of the stigma, and their label against them as, “well, you shouldn’t be out here anyways so what do you expect. That’s what you get.” That’s a widespread mentality: that people engaged in sexual work, sexual exchange, sexual trade… that they are worthless. They are throwaway. That’s the attitude that allows and perpetrates violence both from police and from other people such as the Green River killer Gary Ridgway.

MJ: What do you say to people who think prostitution should be criminalized to deter people from getting into it or to convince those in it to find another vocation?

R: I think people defend criminalization because they think [prostitution] is wrong and that sex workers are dirty and they’re bad and they’re just criminals and whatever happens to them they deserve it. And to those people obviously I say, we’re human beings and we provide an important service and sometimes the negative affects of the work we do is a result of criminalization and stigma.

I think for people who are so-called feminist or otherwise claiming to be wanting to help sex workers and criminalizing them is a way to help them, they’re suffering from a problem where they think they know all the answers and they don’t. And they’re not interested in actually listening to people talk about what will help them. They want to tell people how to be helped. They don’t want to hear that maybe this sex worker actually felt that jail changed her life, but that these other three actually have different prospectives about it. Anti-prostitution feminists they want things to be very simplistic. But they are supporting policies that often end in human rights abuses.