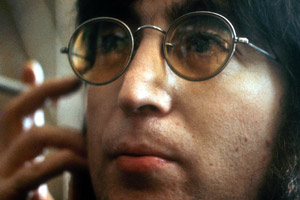 Five years ago, on the 25th anniversary of the fatal shooting of John Lennon, I wrote this remembrance. Unfortunately, it is just as relevant today.

Twenty-five years ago today, John Lennon was shot dead outside the Dakota apartment building in New York City. He died about 11:00 pm. In those days, news was not so instantaneous. It wasn’t until the next morning that many people—myself included—learned of this horrific event. At that time, I was working at the Center for the Study of Responsive Law in Washington, DC—otherwise known as the office of Ralph Nader. I was taking a year off from college.

The news that morning hit me—and millions of others—hard. After stumbling into the office—a rabbit warren of offices, some separated by walls made of cartons containing remaindered books produced by the Nader operation—I was asked to deliver a letter from Nader to President Carter. We didn’t fax back then. I don’t recall what the letter was about, but Nader was probably again blasting Carter, who at this point was a lame duck preparing to vacate the White House after losing to Ronald Reagan the previous month, for failing the public interest on some regulatory matter. I didn’t mind the assignment. I didn’t feel much like working or talking to anyone. It was a cold morning and about half a mile walk. I could stretch this mundane delivery task into an hour of solitude.

I walked down 16th Street NW, and within a few blocks I passed the headquarters of the National Rifle Association, an entire building next to one of Washington’s lovely traffic circles. I stared at the building. My sadness and numbness slid into anger. I didn’t know yet that Lennon’s killer, Mark David Chapman, had purchased the .38-caliber handgun with which he shot Lennon, at a Hawaii gun store despite having a record of mental illness. But I did know that the NRA and its allies in the gun industry were one of the most powerful lobbies in town and that their primary concern was easy access to weapons. I started talking to the imposing building. “No,” I said, “no, you’re not going to get off scott-free here, no, no way.” And an idea struck.

After dropping off the letter to Carter at one of the entrances to the White House, I hurried back to the office. I told Russell Mokhiber, one of the staffers and a veteran agitator, that I had decided to mount a protest rally outside the NRA’s office. Here was a chance, I thought, to spur a debate on gun control. I wanted time off to organize the event. Mokhiber approached Nader, who said that would be fine, but that I should do it as a private citizen, not as an associate of the Center. That was fine by me. I immediately formed Citizens against Gun Violence, an “ad hoc citizens group.”

CAGV—that is, me—quickly picked a date a few days hence for the event and designed a flyer advertising the rally. In recent weeks, there had been other examples of handgun violence in Washington. The brother of author David Halberstam, a local doctor, had been shot and killed by an intruder whom he had chased out of his home. And a popular community activist, a young African-American woman, had been shot dead, too. The flyer featured both of them and Lennon. And I asked a copy shop—no Kinko’s back then—to print hundreds of copies on a super-rush basis. It could in those days take a day or two to get such a job done. The person at the counter looked at the material and said, “Come back in an hour.”

CAGV grew in numbers, by which I mean that several interns at the Center and some friends of mine volunteered to put up flyers around town. Mokhiber went out and bought a bullhorn. I filed a permit application minutes before it was due. A local radio station announced that Lennon fans would be gathering at the end of the day on the steps of the Lincoln Memorial. And as soon as the copies of the flyer were ready, I picked them up and headed toward the Lincoln Memorial.

There were several hundred people on the steps. One scrawny-looking fellow was in the middle of the crowd, holding up a cheap cassette player—no iPods, either—that was blaring out various Beatles and Lennon tunes. I politely pushed my way toward him. I handed him one of the flyers and asked if at an appropriate time he would let the people around him know about the rally. He looked at the flyer. The cassette player was playing “While My Guitar Gently Weeps.” He said, “No, you tell them.” The song ended. He turned off the machine and said, “This guy has something he wants to say to you.”

On the steps of the Lincoln Memorial, I made my first and only political speech. “We’ve just heard this song that says, ‘After all this time, we must surely be learning,” I began. “But are we? There are 10,000 handgun deaths a year. Are we learning how we can prevent that?” I noted that not only Lennon but other important members of our community had been killed by guns recently and that efforts to restrict guns routinely fail. “Why?” I asked. “Because people who work there”—I pointed across the Reflecting Pool toward the Capitol—”listen too much to the people over there”—I pointed in the direction of the NRA building. But, I added, now was an appropriate time to show that other Americans had different views. I asked the people there to come to the rally. And I’m afraid I said something corny like, “Imagine if everyone who feels as you do today showed up.” When I was done, the scrawny fellow gave me a hug; the people applauded. I darted off to start putting up the flyers.

Besides working the grassroots, CAGV had a media strategy. I had fellow workers at the Center call up various media outlets—particularly radio stations that played rock music. They asked for the news or program director and then said something like, “I hear there’s going to be a large protest outside the NRA headquarters in three days to commemorate the death of John Lennon and to call for sensible handgun control, and I want to go. Do you have any information on this?” Of course, they did not. But invariably the person on the other end of the phone said, “No, but if you find out anything please let me know.”

Hours later, I would call these media people and say, “I’m David Corn of Citizens Against Gun Violence, an ad hoc citizens group. I understand you’re looking for information on the rally we’re holding.” Everyone was quite keen on listening to me. Several radio stations asked me to come into their studios to talk about the event. “Was I exploiting this tragedy to make a political point?” some asked. “Yes,” I said. The aim was to use this awful killing to advance policies that might prevent such another tragedy from occurring. “Do you think,” I countered, “that John Lennon, the antiwar, antiviolence activist, would mind?”

Word got out. People started calling from all over the region. Some students at a college—I believe it was in Pennsylvania—were renting a bus. I contacted the leading gun control advocates in Washington, convinced them this event was actually going to happen, and got them to commit to attending and speaking. Within a day or two, the office had unofficially become the headquarters of CAGV. Nader asked what was going on, but he didn’t seem to mind. Nor did his chief of staff, John Richard.

The rally went off as planned. About one or two thousand people, I believe, showed up. There were camera crews, reporters from various newspapers. I put the professional handgun control advocates in front of the journalists; they gave the interviews. So too did relatives of Halberstam’s brother and the community activist. All these people used the new bullhorn and spoke of the need for restraints on guns. I gave no speech. One woman approached me and said she had come because she had heard me on the steps of the Lincoln Memorial. The bus from Pennsylvania (or wherever) arrived. Cars driving by honked.

The event—as far as such events go—was a success. There was media coverage. Those who had come felt they had done something with their grief and anger. And as almost always happens when a prominent act of gun violence occurs, the topic of handgun was again on the radar screen. Not because of our effort, but we had done our part. However, that moment—like all moments—quickly faded. It is now 25 years later. John Lennon is still dead. (And so is George Harrison.) The NRA years ago moved to a bigger and better headquarters in suburban Virginia. The gun lobby has had its ups and downs, but it’s been mostly ups of late (such as the expiration of the ban on assault weapons). Lennon’s death, it turns out, was no catalyst for action. And we have still—after all this time—not learned how to stem the tide of gun violence. Which is one of several reasons why this anniversary of Lennon’s death is a sad day.