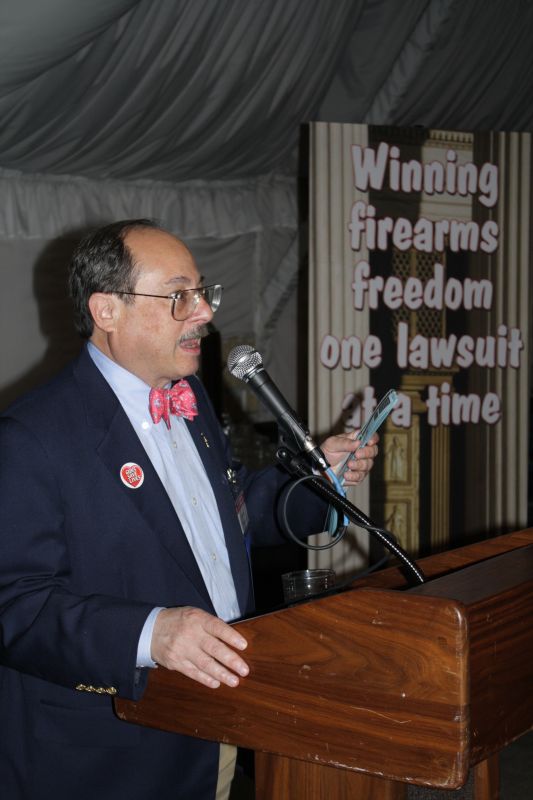 Please Do Not Display Weapons: “In consideration of other guests and staff please do not openly display weapons. While in your guest room, all weapons must be concealed.” —Hyatt Regency sign at the Gun Rights Policy Conference in Burlingame, California.

Steve Goode is the fourth man in the hotel who offers to take me to a gun range. At 63, the mostly deaf National Rifle Association instructor wears high-powered digital hearing aids and owns a low-powered shotgun he uses for trap-shooting. Fortunately, “you don’t need to hear to shoot,” he tells me at this year’s Gun Rights Policy Conference in Burlingame, California. Like the other white, male boomers crammed into a Hyatt ballroom one recent weekend, Goode registered for the two-day-long event (with added poolside reception!) because he’s riled by handgun regulations cropping up in states across the US—especially in Illinois, where he lives. The waiting periods to get a gun permit, the training, the registration, the background checks, the restrictions on where, how, and which firearm and ammo he can use—all these not only threaten his hobby but his ability to defend himself, he says—and he’s becoming more politically active this fall as a result.

He’s one of 760 pro-gun, anti-regulations travelers here to learn about everything from how to win a legislative gun debate—”THEY win if you say ‘pro gun.’ YOU win if you say ‘pro rights,” instructs “The Politically Corrected Glossary” handout (PDF)—to why he should distrust the United Nations, to the legal strategies he can successfully use to carry concealed handguns in public parks, college campuses, and public housing. Among the 50-plus speakers on the lineup are the lead counsel in the Chicago Supreme Court case, the director of Doctors For Responsible Gun Ownership, the heads of Students for Concealed Carry on Campus, and pro-gun professors, authors, and journalists. On the “Diversity Among Pro-Gunners” panel, Nikki Stallard—the transgender representative of Pink Pistols, an LGBT-led advocacy group for carrying concealed weapons in public places—announces at the podium:”We have an interest in getting the gay community more pro-gun.” If LGBTs become the face of concealed weapons rights, Stallard surmises, media attacks on the pro-gun lobby “will come across as attacking the gay community.” Her suggestion is met with roaring cheers.

Several speakers encourage recruiting gay people, women, and minorities into the pro-gun, anti-regulations fold. “People who are the most vulnerable in society benefit the most from having the option to be able to protect themselves,” John Lott, the author of More Guns, Less Crime, says. He adds that women, the elderly, and “poor blacks who live in high crime areas” are disproportionately deterred from getting firepower when waiting periods are extended and fees rise. I’m not convinced. The crux of the conference remains rolling back gun restrictions. As Bob, a 51-year-old NRA instructor from Redwood City and a gun owner since he was in high school, tells me during our boxed-lunch recess: “There’s no such thing as reasonable regulations when it comes to firearms. The less the government’s involved in gun control the better I feel.”

“The less the government’s involved in gun control the better I feel.”

After inviting me shooting, Jeff Knox—a gun owner for 25 years and the director of The Firearms Coalition—tells me that to understand the anti-gun regulation crowd, I have to understand gun culture. “Shooting is something that a lot of guys really love, with the same fervor that you find among golfers, fisherman, and football fanatics. Imagine what would happen if somebody wanted to ban football in the United States!”

“There’s also that fundamental liberty core of self-defense,” Knox adds. “Let’s face it, the bumper stickers are true. In a life or death situation, seconds count, and the police are only minutes away. And that’s what it boils down to. If I feel that I have a right to protect my family, who has a right to tell me that I don’t?”

But defense from what, I ask him? According to the Federal Bureau of Investigation, violent crimes in the US are actually declining nationwide—and the offenders are more often friends and acquaintances (PDF), not strangers busting through women’s home windows like the

She’s the face of the gun rights conference billboards seen around San Francisco.: Second Amendment Foundationbillboard advertisements for the conference inaccurately display. Add that to Department of Justice data (PDF) showing that most violent crime victims are black, males, age 24 years or younger, and the mostly white, suburban men at this particular gun rights conference are probably safer than they feel. No matter, says Knox. “I don’t have guns because I’m afraid. I carry a gun so that I don’t ever have to be afraid,” adding that even a wee possibility of an assault gaurantees his right to carry. Which is true. The Second Amendment grants folks the right to keep and carry arms, but what about regulations?

“Firearms are like golf,” Bob from Redwood City, Phil Graf from Sonoma County, and Goode all tell me, as though they’re all working from the same talking points. But golf doesn’t involve the sporting equipment used in most US murders. Besides, most products that could result in dangerous mishandling or criminal activity are regulated by the government. Why should guns be the exception, I ask? “Well, things that are protected by the Constitution shouldn’t be so heavily regulated by the government,” says Alan Gottlieb—the head of the Citizens Committee for the Right to Keep and Bear Arms (CCRKBA) and the founder of the Second Amendment Foundation (SAF), the legal piranha which spearheaded this particular gun rights conference 25 years ago. “Cars can be dangerous, but they’re not in the Constitution.”

Both Knox and Gottlieb accurately point out that most firearm-related crimes are committed by repeat offenders, not law-abiding citizens. And felons are already barred by federal law from receiving gun permits. Murders, as a result, usually involve once-legal handguns acquired in the black market, not guns shot by their permitted user. As a result, Knox contends of the gun regulations in place: “All they’re effective at doing is making it more difficult for me to exercise my rights. Gun control is all aimed at law abiding citizens, and it has no effect on the criminal.” Because they haven’t committed crimes, the speakers posit, they’re immune to committing the crimes that gun regulations are positioned to prevent, not to mention inconvenienced. This faulty logic is endemic here at the conference.

“Rape is illegal, murder is illegal, robbery is illegal. So if you make it illegal for the criminal to get a gun, does he really care?” Gottlieb asks me. “What happens is that gun control spends all of our resources tracking and regulating the 99 percent of people with guns who don’t commit a crime, and the 1 percent who commit the crime we don’t do anything about.”

I factchecked this, and the answer is: Not exactly. The Bureau of Alcohol, Tobacco, Firearms and Explosives found that states with tougher gun laws in fact export the guns used in crimes (PDF) at a much lower rate than states with weak gun laws. That is, those illegal guns handled by criminals and confiscated at crime scenes are most often traced back to states that don’t do background checks for all guns purchased at gun shows [CLICK HERE FOR MOJO’S ARTICLE ON GUN SHOWS], that don’t require purchase permits, that don’t prosecute gun dealers who violate background check laws, and that don’t allow local law enforcement to approve or deny conceal carry permits. Findings confirm that regulations do deter criminals from getting guns.

A decade ago, the Los Angeles Times published an investigative report exposing that lax background checks in Texas had resulted in 400 convicted felons receiving concealed-handgun permits. And more than 3,000 concealed-handgun licensees had been arrested after receiving their permits. The report led Democratic Sen. Carl Levin (Michigan) to issue this response: “Law abiding citizens, armed with concealed weapons, are too often turning what would otherwise be unpleasant but not catastrophic events, such as fender-benders and commuting hassles, into tragedies.”

Knox doesn’t buy it. He says things like, “I’ve never used my gun or drawn it in anger,” and, “The gun in my house doesn’t increase the odds of a firearms crime occuring in my house because I’m not a criminal, my family aren’t criminals, and we’re not people who commit crimes.” [CLICK HERE FOR MOJO’S EXPOSE ON THE NRA’S FAMILY VALUES CAMPAIGN.]

This thought process has led one of the conference’s biggest sponsors, the California Rifle and Pistol Association (CRPA) to successfully lobby against bills requiring all rifles and shotguns to be registered with the state’s Department of Justice. The CRPA has also helped defeat a proposed ban on carrying unloaded handguns in public (licensed hunters would have been exempt). And it helped ensure that more misdemeanors won’t be added to the list that prohibits firearms possession for ten years. Now the group has its sights on AB 962, which takes effect February of next year. That bill outlaws mail-order ammunition sales and requires that people purchasing ammunition are fingerprinted and registered at the time of sale so that the California Department of Justice can inspect the records for at least five years. The CRPA’s dubbed the bill (PDF) an unnecessary burden for ammunition retailers, potential law-abiding buyers, and law enforcement. Knox says “Registration leads to confiscation.” If the government knows about his weapons, it can take them away.

I ask Gottlieb if he thinks some middle ground can be achieved in the guns and regulations debate. “If you want to deny or restrict a person’s rights or freedom, our people aren’t going to be in on that. That’s why this issue isn’t ever going away.”

In the meantime, Knox says: “I just want to have my guns.”