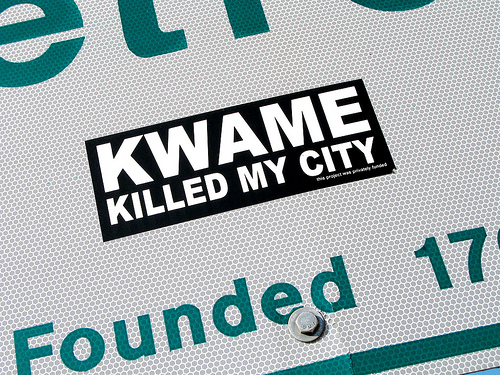 [MoJo has more primary coverage: Read my report on Michigan’s gubernational results, and Nick Baumann’s take on Missouri’s primaries for US House and Senate.]

“This is the final curtain: the ending of the Kilpatrick dynasty.”

Cheeks Kilpatrick, a seven-term Democrat, represented Michigan’s 13th congressional district, which includes large parts of Detroit. Her defeat is largely attibutable to one of the worst scandals in that city’s history. The salacious saga centered on her son, Kwame, Detroit’s disgraced former mayor, who had an affair with his chief of staff, lied about it under oath, and spent millions in city funds fighting public disclosure of text messages and secret settlements. The former chairwoman of the Congressional Black Caucus, Cheeks Kilpatrick lost to state Senator Hansen Clarke;  at 11:45 p.m., Clarke had 46 percent of the vote and Cheeks Kilpatrick 40 percent. The Free Press described Hansen’s win as a “stunning upset victory.”

Here’s more from the Freep as the results roll in:

The defeat could spell the end of a 14-year congressional career for Kilpatrick, who has been dogged by the legal problems faced by her son, former Detroit Mayor Kwame Kilpatrick, now serving time for violating probation on state felony charges and awaiting trial on federal charges of tax evasion and mail and wire fraud.

The race has been among the most watched races in the state.

A subdued crowd at Kilpatrick’s election night party in downtown Detroit waited for the final numbers to roll in, hoping that absentee ballots might reverse the trend…

At Clarke’s party at the Centaur Bar in Detroit, the mood was much more upbeat. Cheering erupted as Clarke greeted the crowd.

“What’s missing is a congressman willing to work in the city,” said Detroit city councilman Gary Brown. “I hope he can bring the Michigan delegation in Washington together.”