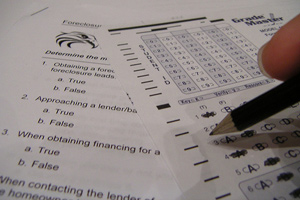 More than 100 Atlanta educators may be sanctioned for suspiciously erasing wrong answers on elementary school students’ standardized tests and replacing them with correct responses, the Atlanta Journal-Constitution reports.

An official inquiry into the alleged cheating began last year following a six-month Atlanta-Journal Constitution investigation of possible cheating on the Criterion-Referenced Competency Test, the standardized test used to determine whether schools are meeting national and state education standards. According to the AJC’s analysis of sweeping test score gains between 2008 and 2009, which showed some of the lowest performers mysteriously become some of the highest, the odds of making leaps in proficiency like those seen at some Atlanta schools were less than one in a billion.

In a report released Monday, investigators wrote that widespread cheating seemed to be limited to 12 schools—far fewer than the nearly 50 initially flagged by state officials as suspicious. But more than a third of the educators deemed at fault are principals and other school administrators, indicating the possibility of inter-school collusion in the cheating scam. The report cited no evidence that either Atlanta Public Schools Superintendent Beverly Hall, who has been aggressive in her efforts to hold teachers accountable for students’ standardized test scores, or other top education officials played any role in the the scheme.

“We know that student achievement and measurable outcomes are critical,” said Gary Price, the investigatory panel’s chairman. “But that has to be balanced by positive and ethical behavior.”

Though Atlanta may be sanctioned for failing to meet Adequate Yearly Progress—a measure used to determine if states are meeting standards set by Bush’s No Child Left Behind law—and federal funding may be withheld as a result, these cheating adults could get off scott-free, in spite of the investigators’ reccomendations. In a 5-4 decision made late Monday night, the Atlanta Board of Education voted to formally decline the findings of the investigation it ordered. The report is now being sent to state education officials, who may still levy penalties against the teachers who have been implicated in the cheating scandal.