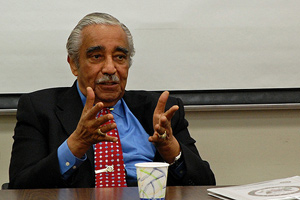 New York Rep. Charles Rangel plans to vigorously fight the ethics charges lodged against him Thursday evening by the House ethics committee. But the public ethics trial Rangel has insisted upon, which will likely start in September, is set to collide with this fall’s midterm elections season and could damage Democratic prospects as a result.

Rangel could have settled with the House ethics committee and ended the investigation behind closed doors, a resolution his party likely would have preferred. But this quieter fix would have forced Rangel to admit that he accepted four rent-controlled apartments in Manhattan and misused office stationary to solicit donations for the Charles B. Rangel Center for Public Service at New York’s City College, among other allegations. Though he was willing to accept responsibility for some violations, Rangel would not budge on others, the Associated Press reported.

When asked by a New York Daily News reporter if he would defend himself at trail, Rangel responded, “You bet your sweet ass. If I can testify, I will.” Rangel also told reporters that he has been waiting for a chance to speak publicly and clear his name since his ethics investigation began two years ago: “Now the facts are going to get out and I think that’s good. I don’t have any fear at all politically or personally what they come up with.”

But Rangel may not need to clear his name in Harlem, where he is the only congressman many of his constituents have ever known. Residents told NY1 that they were in no rush to judge Rangel. “I deal with the facts, so until all the facts come out, I don’t want to say, because right now it’s all speculation,” one resident said. “Other people are doing the same thing, but they’re after him,” said another. And for those New Yorkers old enough to remember life before Rangel got elected, many recall him as a Korean War hero with a Purple Heart and a Bronze Star, accolades he campaigned on decades ago.