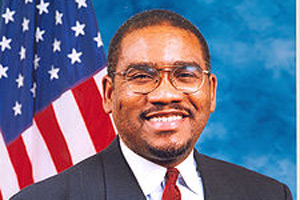 <a href = "http://motherjones.com/mojo/2010/07/crew-accuses-liberal-democrat-ethics-violations">Wikimedia/Creative Commons </a href>

A New York Congressman who once rented a Lexus with taxpayer dollars is being accused of serious ethics violations.

CREW’s allegations stem from series of New York Daily News articles that focused on $40,000 that Meeks received from businessman Ed Ahmad in 2007. Meeks told the Daily News he considers the 40 G’s from Ahmad a “loan” that he desperately needed for “family obligations” and “things.” But despite the large size of the loan, Meeks failed to mention it on his 2007 and 2008 personal financial disclosures (PFDs). The congressman claims the omission was an “oversight.” But CREW doesn’t agree:

[B]y knowingly failing to report the $40,000 he received from Mr. Ahmad on his PFDs in 2007 and 2008, Rep. Meeks made false statements in violation of federal law, a felony punishable by up to 5 years in jail. CREW also alleges that by taking the $40,000 Rep. Meeks violated the House gift rule, which prohibits members of Congress and staff from accepting most gifts.

Meeks only repaid the “loan” after the FBI questioned Ahmad about it. And get this: to get the money to pay off the loan from one donor (plus 12.5 percent interest), Meeks took out a $59,650 home equity loan from Four Investments, a firm owned by yet another New York businessman and longtime Dem donor. CREW notes that Four Investments has not made similar loans to anyone else in the state.

You can read the full complaint (PDF) here.