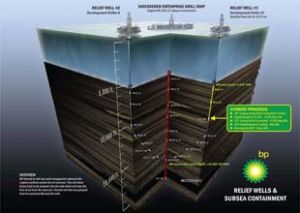 Also: James Ridgeway writes about the oil industry’s slimy history—and why no oil exec has ever gone to jail for environmental devastation.

The Department of Justice announced Tuesday that it is conducting a criminal probe into the explosion, and that the federal government is weighing both criminal and civil penalties for the disaster. The administration, Holder said, wants to “make sure the American people don’t foot the bill for this” and will be “meticulous, comprehensive and aggressive” in doing so.

“We have begun both a criminal as well as a civil investigation as is our obligation under the law,” Holder told reporters following a meeting with state and federal prosecutors in New Orleans. “Our environmental laws are very clear.”

He also said that the government will be “forceful” in its response if “evidence of illegal behavior is found. He added, however, that they believe there is “sufficient basis” to begin a criminal probe. In the past days, more evidence has come to light that BP ignored warning signs at the well and cut corners.

There are a variety of laws at their disposal in coming after BP: The Clean Water Act, the Oil Pollution Act, and the Endangered Species Act. As I reported earlier, the company could already face up to $4.6 billion in civil penalties for Clean Water Act violations alone. Senators have also asked the DOJ to look into whether the company made false claims about its ability to respond to a disaster.

Last week, Ronald Weich, an assistant attorney general, informed senators that the DOJ has issued formal demands to BP, Transocean and other companies to “ensure the preservation of potentially relevant information.” The demands also outlined the “legal requirements for preserving evidence in anticipation of litigation,” Weich wrote.