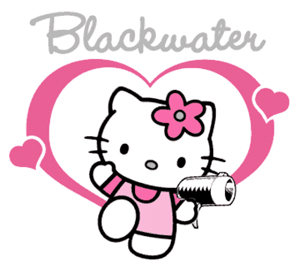 Hey, remember when Blackwater killed all those Iraqis in Baghdad’s Nisour Square, and billed the government for prostitutes, and probably assassinated people was enlisted in an aborted US plan to maybe assassinate people, then got in trouble, then changed its name to Xe™ and attempted a rebranding campaign? To hell with all that, the company now says: It’s time to market the Blackwater brand of clothing! After all, as M.I.A. just told the New York Times, “The best sportswear is on Blackwater operatives!”

Noah Shachtman of Wired‘s Danger Room blog caught wind today of a company plan to open two retail stores—one in Salem, Connecticut, and one in Fayetteville, North Carolina, near Fort Bragg (home of the military’s Special Operations Command). Blackwater Pro Shops, as it’s being billed, already has an online store, selling firearms and beer coozies with the firm’s bear-paw logo. On the front page, there’s also a sale on T-shirts from the not-at-all-ironically-named Afghan outpost, Camp Integrity.

No word yet on when they’ll open. But I’m looking forward to perusing the “sale rack” of Afghan and Iraqi antiquities. Maybe I can even get a $400-an-hour job as a sales associate!