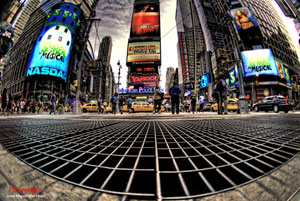 On Saturday night, a t-shirt vendor alerted police to a suspicious SUV in New York’s Times Square. Smoke was flowing out the back grates of the vehicle; when the bomb squad looked inside, they found an “amateurish” car bomb: 5-gallon jugs of gasoline; propane tanks; and commercially available fireworks filled the back of the dark-green Nissan. “We got very lucky,” New York mayor Michael Bloomberg told reporters in a late-night press conference. The bomb could have proved “very deadly,” Bloomberg said. A former bomb squad tech later told the New York Times that the bomb would have probably produced more of an “incendiary” event, not a massive explosion, if it had gone off.

Most major news outlets haven’t picked this up yet, but the (well-sourced and normally very reliable) Long War Journal reported on Sunday morning that a Pakistani Taliban commander has claimed credit for the attack:

Qari Hussain Mehsud, the top bomb maker for the Movement of the Taliban in Pakistan, said he takes “fully responsibility for the recent attack in the USA.” Qari Hussain made the claim on an audiotape accompanied by images that was released on a YouTube website that calls itself the Tehreek-e-Taliban Pakistan News Channel.

The tape has yet to be verified, but US intelligence officials contacted by The Long War Journal believe it is legitimate. The Tehreek-e-Taliban Pakistan News Channel on YouTube was created on April 30. Officials believe it was created to announce the Times Square attack, and Qari Hussain’s statement was pre-recorded.

You don’t need Mike Allen’s “Playbook” to know that this is going to be a big story this week. Even if the Pakistani Taliban weren’t responsible for the attempted attack, the LWJ report suggests they may have known about it in advance.

UPDATE, 4:04 p.m. EST: The NYPD is now saying there’s no evidence of a Taliban link.