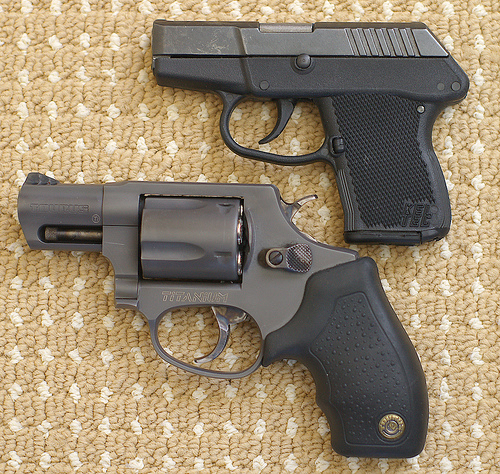 Texas allows its citizens to pack heat just about anywhere, including inside bars*, shopping malls, and state administrative buildings. Sometimes this can be kind of scary. In January, an angry man carried a handgun into the office of a senator in the state’s Capitol and then fired off five shots outside. So the Capitol building is installing metal detectors and X-ray machines that can detect firearms.  Not that bringing a gun inside has become illegal. This is Texas, after all. If a security guard finds your Colt .45, Glock, or Smith & Wesson, he’ll just hand it back to you and welcome you inside.

“This is not going to make the Capitol a gun-free zone–no way,” Texas Land Commissioner Jerry Patterson told the Austin Chronicle. Under Texas law, anybody can still carry a rifle or shotgun into the Capitol as long as it’s done in an open and non-threatning way. And people who have concealed handgun permits–getting one requires only a social security number, a quick background check, and a safety class–need only flash their permits and walk on through.  “The [Department of Public Safety] cannot prohibit firearms in the Capitol if they are carried lawfully,” said Patterson, who is the author of the state’s 15-year-old concealed handgun law. “The legislature would have to change the law to prohibit them and they’re not going to do that.”

So are the metal detectors and X-ray machines a complete waste of money? Probably not. They just need to be used more creatively. They could help security guards identify which honest-looking citizens don’t yet have concealed handguns, and then give those folks loaner weapons for use in defense of the Capitol. Because as Patterson points out: “The more honest, responsible people with firearms, the safer Texas is.”

After the jump, Patterson defends the law on video, and demonstrates his pistol’s boot-holster. . .

*A reader argues that Texas actually bans handguns in bars. He is technically correct, but  an amendment made last year to the state’s concealed handgun law stipulates that handgun owners can be immune to prosecution for the offense if they were not given “effective notice” by the bar owner that handguns are not allowed there.