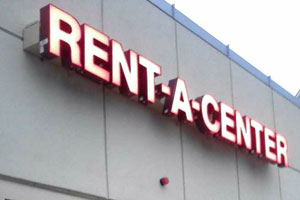 The ever-more business friendly Supreme Court will hear oral arguments today in a case that has the potential to shut a whole lot of regular Americans out of the justice system. The nation’s largest rent-to-own furniture company, Rent-a-Center, has asked the court to decide essentially whether huge corporate players should be able to use one-sided contracts to opt out of the civil justice system and judge themselves when customers and employees want to sue for discrimination or other abuses.

The case has enormous implications for big business, which has for years now been able to avoid legal accountability and big jury awards for employment discrimination, fraud, and even sexual assault by forcing people to sign what’s known as a mandatory arbitration clause as a condition of getting a cell phone, using a credit card, buying a car, or getting a job. The clauses force people to bring any complaint against the company before a private arbitrator, hired by the company, whose decisions can’t be reviewed by a judge in most cases. Not surprisingly, those arbitrators rarely find in favor of the little guy. But over the past couple of years, the little guy has been fighting back and occasionally winning important victories.

People like Jaime Leigh Jones have, against great odds, prevailed over much more powerful entities once they’ve gotten inside a regular courtroom. Leigh is the KBR/Halliburton employee who alleged that she was gang raped by her co-workers in Iraq and then confined to a storage container by her employer. She recently prevailed in a challenge to the arbitration clause in her contract that would have forced her to have her rape case heard by a Halliburton-hired arbitrator rather than a jury. Deborah Williams and Richard Welshans, after years of litigation, last year also won a ruling in federal court allowing them to finally bring a fraud lawsuit against the Coffee Beanery, a company they allege duped them into sinking hundreds of thousands of dollars into a doomed franchise. (The victory, unfortunately, came too late to save their house.) But if the Supreme Court rules for Rent-a-Center in the case argued today, even those rare victories will become nonexistent. That’s because, as Public Citizen’s Robert Weissman has written, “The question presented to the Supreme Court in Rent-A-Center is, essentially: Can a corporation’s hand-picked arbitrator decide whether it is fair for the company to hand-pick its arbitrator?”

Rent-a-Center West v. Antonio Jackson got its start back in 2004, when the nation’s largest “rent-to-own” furniture store hired Jackson, an African-American, as an account manager. Eventually, Jackson sought promotion, but each time, Rent-a-Center hired a non-black employee with less seniority. Finally, Jackson was promoted after he complained to various higher-ups, but then after two months, Rent-a-Center fired him without cause. He sued in February 2007 in federal court for racial discrimination. But when he went to court, Rent-a-Center argued that the arbitration clause Jackson had signed when he was hired required him to go to private arbitration—and to pay half the cost.

Jackson countered that the arbitration clause was so one-sided that it was completely unconscionable, and thus unenforceable. For instance, while the provision forced Jackson to take any complaints against the company to arbitration, it allowed Rent-a-Center to sue Jackson in a real court should he disclose trade secrets or other confidential company info. The agreement also put strict limits on how much information Jackson could procure from Rent-a-Center in discovery and said he could depose two people for his arbitration, a laughably small number compared to what he would need to prove discrimination.

Nonetheless, a federal district court ruled against him—not because the contract was so ridiculous, but because it said that if Jackson wanted to challenge the arbitration clause as unconscionable, he had to do it before a Rent-a-Center-paid arbitrator, not a judge, as is the standard practice. The district court basically said it was okay for Rent-a-Center to ban judicial review simply by writing it into a contract that Jackson had no choice but to sign. The 9th Circuit Court of Appeals overturned the decision, arguing that questions about unconscionability were definitely something for the court to oversee. Rent-a-Center appealed, and the Supreme Court took the case up on an expedited basis and will hear arguments today. What the court will do is anyone’s guess. Given its decidedly pro-business tilt these days, as seen in its recent Citizens United decision allowing unlimited corporate money into elections, it’s not out of the realm of possibility that it will side with Rent-a-Center.

At the same time, though, Rent-a-Center is hardly a model corporate citizen. It could provide a case study for why people need access to unbiased courts. Last year, the state of Washington sued the company for allegedly abusing its customers who made late payments on rent-to-own furniture and electronics. Investigators turned up customers who’d had Rent-a-Center employees kicking their doors in and threatening to arrest them and send their children to foster care because they were a day late making a payment on their big screen TVs. The state found that the company had engaged in unfair and deceptive practices that left consumers unable to figure out exactly how much renting it would take before they finally got to own their stuff (which no one ever did). State investigators found people who’d paid more than $6,000 for a used TV, for instance. Even this Supreme Court might have to think twice before letting companies like Rent-a-Center hire arbitrators to decide whether they are behaving badly enough to be sued before a jury.