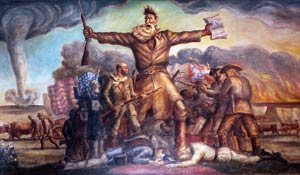 Yesterday, because it was within walking distance of my house, and because I have an unhealthy fixation with the Pottawatomie Creek Massacre, I checked out the San Francisco Community Music Center’s production of John Brown’s Truth, the world’s first-ever improvised jazz opera about the 1859 raid on Harper’s Ferry. While I don’t want to give away the ending, suffice to say, the main character dies in the end. It was a novel concept, and one which I’m hardly qualified to critique the musical merits of, but I will say that the audience seemed to enjoy it, and the little girl with the jump rope—who periodically invited the audience to join her rhymes about Harriet Tubman and Malcolm X—deserves her own solo act.

It was tough to really appreciate John Brown’s Truth, though, because it didn’t seem particularly concerned with the truth about John Brown. Pottawatomie Creek, where Brown presided as five pro-slavery Kansans were hacked to pieces in 1856, goes unmentioned. I know, I know: Let he among us who hasn’t been implicated in a quintuple homicide cast the first stone. Instead our story picks up in 1859, when Brown gets a message from God to become a martyr for the anti-slavery cause, so Brown becomes something of a one-dimensional hero.

But I don’t mean to pick on the performance, because 150 years (and change) after his death, no one really knows what to make of Brown.

Since his death he’s been a madman and a prophet, a terrorist and a freedom fighter, and above all else, a martyr. And it’s for that reason, far more than the round-numerical significance of the anniversary, that Brown is more than a $200 Jeopardy! question in 2010.

In January, as Scott Roeder prepared to go to trial for the murder of abortion doctor George Tiller, Operation Rescue founder Randall Terry offered his best historical parallel: “Was John Brown’s raid on Harper’s Ferry completely right, completely wrong, or a mix of both?,” Terry asked. Roeder himself later chimed in, arguing that holding a trial without putting abortion on trial as well was like “having a trial for John Brown, but saying it was not over slavery.” It’s not just the pro-lifers; Timothy McVeigh thought he was doing Brown’s work, too.

To latter-day domestic terrorists, Brown is something of a patron saint, because he’s proof that violent actions against civilians can someday be redeemed by history. (That’s also, come to think of it, the whole plot of The Rock.) In Brown’s case, maybe the inadvertent end (sparking a Civil War), really did justify the means, but it’s weird to not even consider his violent extremism when putting on a show about his legacy.

Anyway, here’s a copy of the alternative constitution Brown drafted in 1858 for a hypothetical free United States. He abolishes the Senate and prohibits “indecent exposure.” It’s kind of awesome.