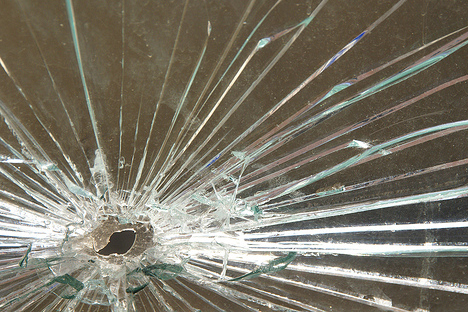 Oath Keepers sympathizer and influential Tea Party blogger Mike Vanderboegh has spent the week in an all-out offensive to defend his demand that followers vandalize the offices of Nancy Pelosi and Congressional Democrats following the passage of this week’s historic healthcare legislation. “Break their windows, Break them NOW,” he told readers last Friday.

Vanderboegh’s website, Sipsey Street Irregulars, has an impressive following and is known to some as the epicenter of the Three Percenter movement. So it wasn’t surprising when so-called patriot Americans nationwide obeyed the call to arms and started crushing windows with rocks, sling shots, and baseball bats.

Predictably, Vanderboegh caught some flack for his comments. Democratic Party officials in New York, where much of the damage occurred, have demanded his arrest but Vanderboegh says he hasn’t yet been questioned by local or national authorities.

But for people critical of the Three Percenter leader, his statements this week have only made Vanderboegh less sympathetic. Appearing on Alan Colmes’ radio show last weekend, he defended this unorthodox opposition to health care reform by saying he was “trying to save the lives of Nancy Pelosi, and every one of these people who do not understand the unintended consequences of their actions.”

He doubled down on this type of language speaking to the Washington Post yesterday:

“The federal government should not have the ability to command us to buy something that it decides we should buy,” Vanderboegh said. The government, he added, has “absolutely no idea the number of alienated who feel that their backs are to the wall are out here . . . who are not only willing to resist this law to the very end of their lives, but are armed and are capable of making such resistance possible and perhaps even initiating a civil war.”

If it does cause a civil war, Vanderboegh’s friends in the Oath Keepers, a group of active-duty soldiers, police officers and veterans who vow to disobey orders they consider unconstitutional, say they’re ready to defend their ideal United States. It may sound far fetched, but with allies in congress and the main stream media, the inflammatory movement looks like it’s here to stay, broken windows and all.