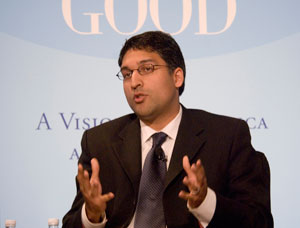 Last week, I received an email that tried to argue that Obama Justice Department officials who represented terrorism suspects in their (often successful) suits against the government are “terrorist sympathizers”:

“I was deeply troubled today by Attorney General Eric Holder’s admission that at least nine or more employees of the Department of Justice used to defend the terrorists in our own court system. These same employees now set our nation’s policy on terrorist detainees. To move from defending terrorists in court to setting national security policy for detainees at the Department of Justice is an inexcusable breach of ethics and common sense.”

This attack is focusing on people like Neal Katyal, the lawyer who won Hamdan v. Rumsfeld, the case that struck down the Bush administration’s military commissions system.

Is beating the Bush administration in court an offense that should disqualify someone from government service? Of course it isn’t. This whole situation is, of course, ridiculous. The main line of attack is fatally flawed. No one wants to “defend terrorists.” The people in the Obama DOJ who once fought the Bush administration on detainee issues were defending terrorist suspects—people who had been accused by the government of planning committing terrorist acts. And a lot of those folks turned out not to be terrorists.

Spencer Ackerman is somewhat more colorful in condemning this smear job. In a post titled, “And Oh By The Way, Did You Notice NEAL KATYAL ISN’T WHITE?????,” Spencer writes:

This “Gitmo Nine” fucking bullshit is beneath the dignity of all thinking people. There is not a single shameful thing about representing a Guantanamo detainee. And singling out Neal Katyal — only a fucking tool or a racist will deny the racial overtones in suggesting that brown man at the Justice Department is a terrorist sympathizer. Katyal is a proponent of creating national-security courts, for Christ sake, something absolutely appalling to civil libertarians.

Between this situation and the rejection of Craig Becker, a nominee for the National Labor Relations Board, because he was too “pro-labor,” you’re seeing right into the heart of what Washington is like. Members of Congress like to pretend that their opposition to various nominees are appointees is based on concerns about those people’s qualifications or temperment. Sometimes, those concerns are real. But most of the time, Republicans oppose Democratic appointees and Democrats oppose Republican appointees because they disagree with the appointees’ politics. Many people would argue that there’s nothing wrong about fighting for labor unions or representing a Guantanamo detainee. But in some Republican circles, doing either could make you a pariah.