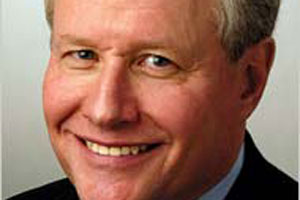 Now that Liz Cheney is being slammed by her fellow Republicans and conservatives—Ken Starr, Ted Olson, John Bellinger III, and more—for having mounted a vicious attack on lawyers who performed pro bono work for suspected terrorist detainees, Bill Kristol, her partner-in-slime, is trying to wiggle his way out of the controversy.

Kristol, the neocon godfather, is one of three board members of Keep America Safe, the group that released an ad decrying these lawyers and questioning their loyalty to the United States. That ad triggered a firestorm of criticism, and most of the incoming fire was directed at Liz Cheney, the outfit’s chairperson. But on Countdown on Friday night, I noted that Kristol also ought to be held accountable for this Cheneyesque crusade. And on Sunday afternoon he took the time to write a post for his Weekly Standard in which he derided the notion that the ad was an attack. He suggested that the spot merely had raised the issue of “whether Congress and the public are simply entitled to know who these lawyers are, and the question of whether former pro bono lawyers for terrorists should be working on detainee policy for the Justice Department.”

This is too disingenuous and dumb to be effective spin. The spot—shot in the ominous style of a scare-’em ad—refers to the Justice Department as the “Department of Jihad.” And as a ghostly image of Osama bin Laden moves behind silhouettes of these lawyers, the narrator asks, “Whose values do they share?”

It isn’t subtle. Keep America Safe is not in this for the sake of  transparency. The group was angling to kick-start a witch hunt. And that’s why so many former Republican officials have been willing to go on record criticizing—some using sharp terms—the daughter of Vice President Dick Cheney. Liz Cheney obviously miscalculated, and the ever-savvy Kristol is looking for cover. But his case—just like the WMD argument he made for war in Iraq in 2002 and 2003—is not supported by the facts. He’s stuck with Liz Cheney in a very-disclosed and very-exposed location.