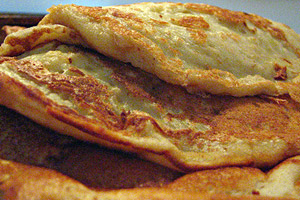 Photo used under a Creative Commons license by flickr user <a href="http://www.flickr.com/photos/fooey/">fooey</a>

When most people think of prison riots, revolts like Attica or MacAlester spring to mind—violent uprisings sparked by racial tension, overcrowding, or abysmal conditions. But as I recently learned while fact-checking a story about a Mock Prison Riot (yes, such a thing exists), not all prison rebellions have such, ahem, sober causes.

Here’s a brief list of some of the more kooky revolts to rock a lockup:

Cause of mutiny: Booze

The HMP Ashwell prison in England has an inmate sobriety problem. In 2003, four inmates smashed computers and caused more than $15,000 in damage after one of them was admonished for being drunk in their cell. Six years later, an inebriated prisoner led a violent protest that included stealing, arson, and looting.

Outcome: HMP learned a valuable lesson: Alcohol and angry inmates are not a good mix.

Cause of mutiny: Pancakes too small

At the Kamloops Regional Correctional Centre in Canada, inmates started a fire and destroyed property, causing $80,000 in damage. Why? As the court document put it, they were ticked about the “size and number of pancakes” served at brunch.

Outcome: Offenders charged with disorderly conduct. No word on whether pancake size or quantity changed.

Cause of mutiny: Improper toilet use

Racial tension came to a head at the Pitchess Detention Center in Los Angeles when, according to the LA Times, an inmate “breached bathroom etiquette” and caused a gang fight. Perhaps for our benefit, the Times provided no further details about said breach.

Outcome: Some of the 102 inmates involved suffered knife injuries. Said the sheriff deputy: “When you’re in jail, little things mean a lot, I guess.”

Cause of mutiny: Prisoners want to move to higher security prison

At a penitentiary in Montreal, two prisoners demanded a transfer from their medium security prison to a maximum security one. When that didn’t work, they held a guard hostage.

Outcome: Success! Prisoners get their wish, are transferred to max-security jail.