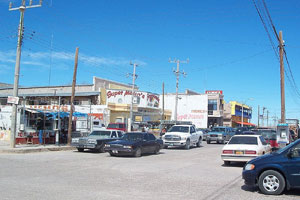 The mayor of the Mexican border town of Palomas, Estanislao Garcia, was kidnapped yesterday morning and then found dead yesterday afternoon. Whether it was the drug cartels or the Mexican army that tortured and shot Garcia, he has become a statistic in the Mexican drug war. So far in 2009 6.8 people have been murdered each day in the drug siege. And the 2nd-year mayor has now become one of the 14,000 people killed since Felipe Calderón took office in December 2006.

In Palomas, a town that like Ascensión falls within the gravitational pull of the sprawling border city of Ciudad Juárez, the entire police force recently resigned, forcing the police chief to seek shelter in the United States. The town is dying. Few people cross from America to shop because of the violence. There is a gray cast to the children begging in the streets that suggests malnutrition. Work has fled—the people-smuggling business has moved because of US pressure in the sector and so the town is studded with half-built or abandoned cheap lodgings for migrants heading north. Also there is an array of narcomansions whose occupants have moved on. And there are eyes everywhere. I walk down the dirt streets tailed by pickups with very darkly tinted windows. The biggest restaurant in town for tourists closes every day at 6 p.m.—get home before dark.

To follow developments in the Mexican drug war, the Juárez region, and the ongoing plight of Emilio Gutiérrez Soto, join the Frontera Google Group maintained by NMSU librarian and border expert Molly Molloy. I will also be posting updates on Emilio’s trial here as the preliminary proceedings get underway later this month.