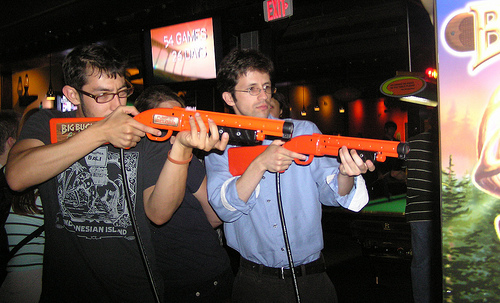 Just yesterday, gun-toting Senate Republicans and their Democratic allies were narrowly defeated in their attempt to allow gun owners with concealed weapons permits legally take their arms across state lines. (No thanks to Harry Reid for his wonderful leadership… Even Kirsten Gillibrand voted nay on this one!)

However, for residents of Tennessee, everything isn’t so hunky-dory. As the Memphis Commercial Appeal reported last week, it became legal for “people with valid handgun-carry permits to go armed—the gun concealed or not—into Tennessee restaurants serving alcohol, provided the restaurant doesn’t ban guns on the premises.” This makes one wonder, what are these lawmakers smoking (or drinking)? A similar law was also just passed in Arizona.

Even our foes friends at FoxNews have acknowledged that alcohol consumption and gun violence are linked—“Heavily consuming alcohol can greatly lower inhibitions, increase confidence and potentially release violent impulses,” according to a University of Pennsylvania study—so it’s ludicrous that legislators would go out of their way to endanger the lives of innocent people who are at a bar or restaurant looking for a non-violent good time, and instead have to be around individuals living out their Wild West fantasies.