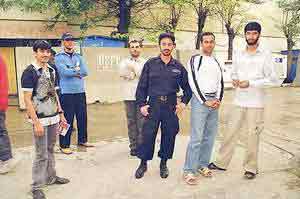 Meet Del and Barbara Spier. The Texas grandparents were bankrupt as of March 2002, but they bounced back big thanks to Afghanistan’s contracting free-for-all. The ink had barely dried on their bankruptcy filing [PDF], when the Spiers’ company, US Protection and Investigations, was handed a multi-million security contract [PDF] by the Louis Berger Group; USAID had selected the construction and engineering conglomerate for the massive task of reconstructing Afghanistan’s decimated infrastructure. USPI went on to land work with the United Nations, the World Bank, and others, growing almost overnight from a mom-and-pop firm into a security behemoth, employing thousands of guards on loan to the company from Afghanistan’s Ministry of Interior and other local powerbrokers (read: warlords). All the while, according to federal investigators, USPI was quietly defrauding the government of millions in connection with its USAID subcontracts—double-billing for personnel, fuel, and vehicles.

I have a long piece out today on USPI’s operations and the fraud allegations facing the Spiers, whose case goes to trial in late September.

Below the fold, a few highlights.

USPI’s contract required the company to protect stretches of terrain so vast that it would have been too costly to hire enough US or expat contractors for the job. But Del had a solution. He brokered a deal with Afghanistan’s fledgling Ministry of Interior, which agreed to loan USPI hundreds of its troops—a coterie of ragtag militiamen under the command of a notorious warlord named General Din Mohammad Jurat. Accused of a range of criminal activity (including the murder of a man whose wife he wanted for his own), Jurat had been described to Human Rights Watch in 2003 as a “maniac” and “dangerous.” In 2007, Afghanistan’s then attorney general, Abdul Jabar Sabet, alleged that Jurat and his bodyguards attacked him in a botched kidnapping attempt. “His allegiance was to one entity and to one entity alone,” says an ex-USPI employee who dealt with Jurat. “That was the US dollar.”

In an arrangement that would have far-reaching consequences, USPI essentially partnered with the former Northern Alliance commander, paying his soldiers a $5 per diem for performing guard duties. According to multiple sources familiar with USPI’s operations, the firm went on to cut similar deals with power brokers throughout the country—basically buying the allegiance of tribal leaders and provincial officials as the road construction work passed through terrain under their control. “If you wanted security, you had to pay off the warlord or whoever controlled that region,” says the former Berger official. In some cases, he says, militia commanders were paid simply to ensure “they’re not going to attack you.”

…Another USPI employee “stated that only about 50 percent of the guards for which USPI billed LBGI actually existed” and that Del Spier regularly overbilled for personnel. Not only were personnel records fabricated, this source said, but Del’s executive assistant, an Afghan named Behzad Mehr, routinely created fake invoices from nonexistent companies for fuel and vehicles. According to one USPI informant, Bill Dupre, the company’s operations manager in Afghanistan, instructed new employees to inflate costs in order to cover expenses like office supplies, ammo, and other items: “You were to put an extra 10 or 15 guards on the payroll that did not exist.” The government alleged that “Del Spier knows about all these activities.” It also claims that Barbara had been involved in the fraud as well, and had even been caught trying to deceive a federal auditor about invoicing Berger for an employee who was no longer working for the company…

The indictment cites additional evidence of fraud, including a May 29, 2005, email exchange in which Mehr had requested Del Spier’s permission to insert addresses and phone numbers on fabricated invoices. Not only did Del direct him to do so, the indictment states, but he also told Mehr “to obtain office space in the event that LBGI requested to see the companies’ offices.” According to court records, templates used to create phony invoices were discovered on computers belonging to Mehr and Barbara Spier. Image files containing the scanned signatures of MOI officials, presumably used to make invoices look genuine, were also recovered.

According to the former security coordinator, whose account is supported by a variety of wire reports, USPI’s guards were taking heavy casualties. “USPI lost a lot of guys,” he says. “We were out in the desert getting pretty much executed.”

“The operations were so hands-off,” he adds. “They stuck people in bad places, and you had to do what you had to do to make sure you didn’t get killed.” He continues, “We were our own little warlords over there. We did our own thing. I could have shot a guy in the head on the side of the road and nobody would have said a thing.”

Why would you hand a noncompete contract to a company with no rep to speak of and freshly bankrupted management team? Here’s what my sources told me:

But Appleton believes he finally discovered why Berger officials were so reluctant to tamper with USPI’s contract—and why Del Spier and his company may have landed the work in the first place. Once, Appleton asked Berger officials why USPI was hired. “The answer I got back was that Jim Myers and Del go way back,” he says. Myers was the engineer in charge of Berger’s Afghanistan operation, and the official who worked most closely with USPI. “Jim Myers was a 100 percent supporter of USPI and Del,” explains the former Berger official. “He wouldn’t accept criticisms of them. Certainly, he would never have entertained—ever, ever—removing USPI. Ever, despite anything. You just didn’t mess with their contract.” He continues, “It was just understood that there must have been a relationship between USPI and somebody in Berger, or Jim. That was just the way it was. That was the only logical reason why that would be in place…It was a relationship issue.”

And, finally, why, if the Spiers are found guilty, their case is just the tip of the iceberg when it comes to reconstruction rip-offs in Afghanistan:

“It’s just endemic,” says the former Berger official, adding that many of these schemes were “hiding in plain sight.” For instance, he says, he knows of people working on reconstruction projects who received several hundred thousand dollars in bribes from subcontractors. “They were the ones who had to sign off on the quantities, on the number of vehicles, on the invoicing,” he says. “The contractor puts in a false invoice, they pay off the guy, the guy certifies it and submits it to USAID. No one’s the wiser. The contractor makes money and the guy supervising it makes money.” Laughing ruefully, he adds, “They bought a small plane for one of them. A small plane.”