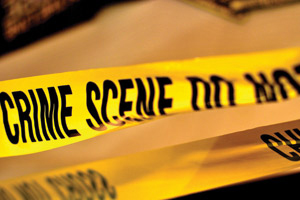 The Kansas City Star‘s Judy Thomas knows more about the extremist fringes of the anti-abortion movement, and about the radical far right in the Midwest, than just about anyone. By last night, Thomas had already uncovered a wealth of information linking the suspect in the George Tiller murder to these violent netherworlds.

Scott P. Roeder was arrested three hours after Tiller, a well-known abortion provider, was shot to death in the lobby of his church. As Thomas documents, the suspect was labeled a “fanatic” even by some other right-to-lifers, and reportedly supported the idea of “justifiable homicide” to prevent abortions. Roeder paid prison visits to the woman who shot and wounded Tiller in 1993, and wrote a Web post declaring, “Tiller is the concentration camp ‘Mengele’ of our day and needs to be stopped before he and those who protect him bring judgment upon our nation.”

“Freemen” was a term adopted by those who claimed sovereignty from government jurisdiction and operated under their own legal system, which they called common-law courts. Adherents declared themselves exempt from laws, regulations and taxes and often filed liens against judges, prosecutors and others, claiming that money was owed to them as compensation.

In April 1996, Roeder was arrested in Topeka after Shawnee County sheriff’s deputies stopped him for not having a proper license plate. In his car, officers said they found ammunition, a blasting cap, a fuse cord, a one-pound can of gunpowder and two 9-volt batteries, with one connected to a switch that could have been used to trigger a bomb.

Jim Jimerson, supervisor of the Kansas City ATF’s bomb and arson unit, worked on the case.

“There wasn’t enough there to blow up a building,” Jimerson said at the time, “but it could make several powerful pipe bombs…There was definitely enough there to kill somebody.”

For this, Roeder was sentenced to two years of supervised probation, and “ordered to dissociate himself from anti-government groups that advocated violence.”

There’s a lot more damning information in Thomas’ piece. After you read the whole thing, take a moment to think about how much time the FBI spent tracking “eco-terrorists” and adding infants, combat veterans, and members of Congress to their million-name terrorist watch list–when they could have been keeping an eye on the likes of Scott Roeder.