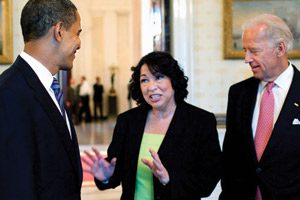 Yesterday, as the political and media world was processing President Barack Obama’s nomination to the Supreme Court of federal appellate judge Sonia Sotomayor, I noted that his decision could split the right. Social conservatives immediately called a crusade against Sotomayor, but Senate Republicans and GOP chair Michael Steele were keeping their powder dry, obviously concerned about the political consequences of attacking the first Latina nominated to the highest court.

And more evidence of a possible split between the party’s base and its leadership in Washington is emerging. I asked conservative strategist Grover Norquist if he believes the Sotomayor nomination would revive conservatives and become a rallying point for the right. “Is the organizer in you happy this happened?” I asked. Norquist emailed a reply: “Yes. Unifies the right. She said what conservatives fear liberals really think–on judges making the law, racial quotas, personal interests trumping the law.” In other words, Sotomayor is the right’s bogeywoman. And Norquist wants to see his side go after her.

Richard Viguerie, a founder of the modern conservative movement, also yearns for an anti-Sotomayor crusade. The day after her nomination was announced, he declared:

The nomination of Sonia Sotomayor unites all wings of the conservative movement–economic, foreign policy, social, traditional, neocon, and libertarian–in a way we haven’t seen since the early Clinton years.

Judge Sotomayor frightens all conservatives. As the debate over her nomination heats up, conservatives will provide the primary opposition to Sotomayor and will quickly launch a massive educational campaign using direct mail, the Internet, talk radio, cable TV, You Tube, and other forms of new and alternative media.

Viguerie blasted Steele for not leading the charge against Sotomayor:

It was sad to read that Republican National Committee Chairman Michael Steele’s comment on the Sotomayor nomination reflected the typical reaction Americans have come to expect from Republican politicians when he said that Republicans will reserve judgment on Sotomayor.

No wonder conservatives now look to talk show hosts and other unelected conservatives for leadership, rather then wet-finger Republican politicians who always seeming to be waiting to see the direction of the political winds.

Viguerie also expressed suspicion that the Senate Republicans may wimp out: “It remains to be seen how active and effective Republican politicians will be on this historic fight.” The initial signs cannot be heartening for Viguerie and like-minded conservatives. Like Steele, Senator John Cornyn, a Texas Republican who sits on the Senate judiciary committee, issued a statement calling for review, not opposition. He said, “It is imperative that my colleagues and members of the media do not pre-judge or pre-confirm Ms. Sotomayor.”

Viguerie doesn’t have the clout he once possessed, when he was the direct-mail king of the right. But his anger and disappointment, no doubt, are shared by other conservatives. The question is how many rightwingers do crave a campaign to annihilate Sotomayor–and what might satisfy them in terms of Senate Republican opposition. It’s unlikely that the GOPers can amass the votes to block or filibuster the nomination. Might they , for appearances’ sake, be able to mount some sort of obligatory (and ultimately unsuccessful) opposition that appeases their base but doesn’t peeve Hispanic voters? That would require a political mastery that Senate Republicans have not demonstrated in years. Norquist’s and Viguerie’s conservative comrades may well indeed unite against Sotomayor, but unless new anti-Sotomayor ammo appears, they are likely to end up disappointed by both the new Supreme Court justice and the Republican Party.

UPDATE: In a subsequent email, Norquist says that he’s not worried about Senate Republicans turning tail on the Sotomayor nomination: “They are completely on message. They are avoiding the [Ted] Kennedy rush to the floor to denounce Bork before there is any national discussion. Knowing what we have on her on tape, her decisions, and her rate of being overturned and the quota decision that may be overturned before she gets voted on….the news for her just gets worse. Why announce opposition now? Just stay neutral. If she looks worse overtime there is plenty of time to decide to vote no. Also, let the other team make their case. I want many Dems out on the limb for quotas and ending the Second Amendment. Don’t underestimate  the gun issue aspect  of this.”