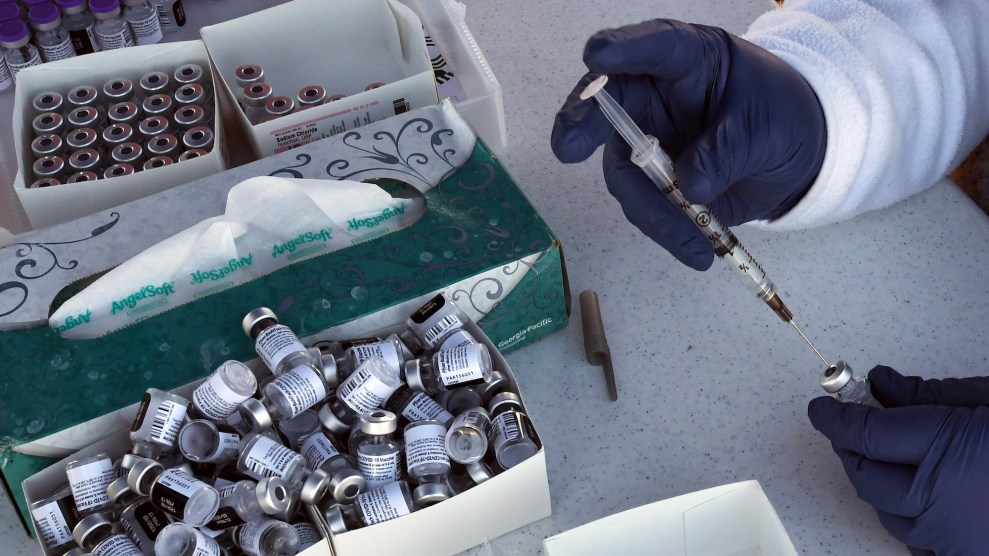 At this point, it’s kind of hard to absorb good news about the pandemic. But here is some to brighten your weekend: More than one-third of all people in the United States have received at least one dose of a COVID vaccine as of Friday, according to CDC data. That’s not just one-third of eligible adults. It’s one-third of everyone—kids included.

We’re still a heck of a long way from “herd immunity,” a threshold for blocking most coronavirus transmission that probably requires about 60 to 70 percent of the population to be fully vaccinated. Whether we ever get there is complicated by variants and disparities in global vaccination rates, and so CDC guidelines on mask-wearing, physical distancing, and avoiding crowds are still very much in effect. But after 558,000 deaths and recent dire warnings about surging infections in a handful of states, I’ll take whatever positive signs I can get.

Accordingly, states and cities are expanding eligibility for who can get a shot. As of Saturday, Los Angeles opened up appointments to all people 16 and older. At least 39 states are now allowing all adults to get the vaccine. Oklahoma and New Hampshire plan to start vaccinating outside residents. (Republican New Hampshire Gov. Chris Sununu had previously been criticized for refusing to vaccinate out-of-state college students, insisting they travel home to get their vaccines.)

With a little over two and a half weeks to go until the 100-day mark of President Joe Biden’s administration, some 183,467,709 first and second doses have been administered in the United States, leaving the country in spitting distance (but please do not) of the White House’s 200 million shots-in-arms goal.

All in all, the US is administering an average of around 3 million vaccines each day. Less than .004 percent of people—fewer than 1 in 28,000—have reported serious adverse reactions to the vaccine, according to the Department of Health and Human Services.

But questions remain about whether the surge of vaccines are going where they are needed most. On Sunday morning, former Food and Drug Administration commissioner Scott Gottlieb estimated that the US would reach a point “where supply outstrips demand” for the vaccine in as few as three weeks. But for now, he recommended surging vaccine supplies to states like Michigan, currently in the throes of a COVID fourth wave. “I think a lot of states are going to see themselves with excess supply and excess appointments,” Gottlieb said on CBS. “So it’s going to be a shame to look back and in retrospect, realize that we probably should have put more vaccine into some of these hot spots to snuff them out.”

“It’s been sort of a Hunger Games for vaccines among states so far,” Gottlieb added. “And we need to think differently about this pandemic.”