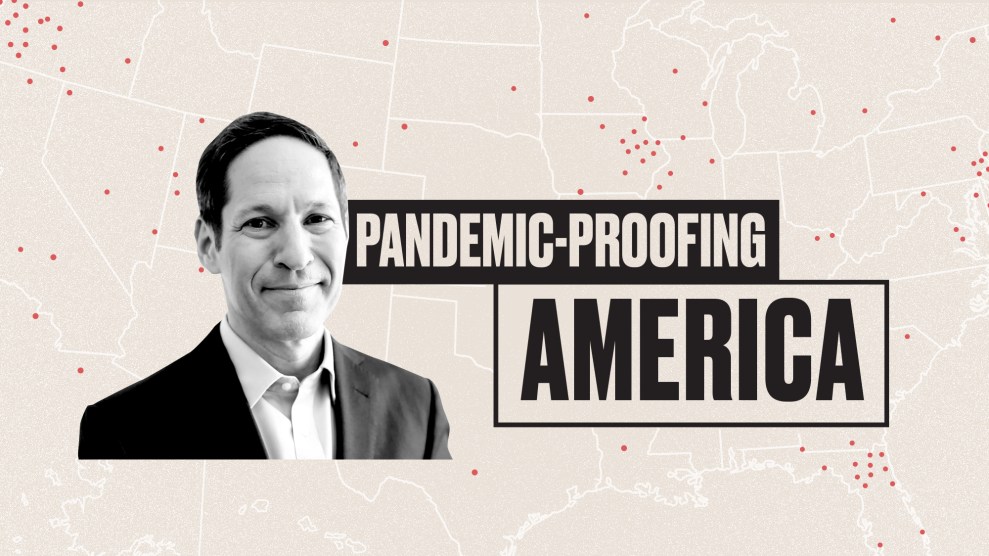 Mother Jones illustration; Courtesy of Resolve to Save Lives

As the world grapples with the devastation of the coronavirus, one thing is clear: The United States simply wasn’t prepared. Despite repeated warnings from infectious disease experts over the years, we lacked essential beds, equipment, and medication; public health advice was confusing, and our leadership offered no clear direction while sidelining credible health professionals and institutions. Infectious disease experts agree that it’s only a matter of time before the next pandemic hits, and that could be even more deadly. So how do we fix what COVID has shown was broken? In this Mother Jones series, we’re asking experts from a wide range of disciplines one question: What are the most important steps we can take to make sure we’re better prepared next time around?

Tom Frieden knows the ins and outs of the American public health system—he served as head of the Centers for Disease Control and Prevention under President Obama from 2009-2017. As the pandemic wore, he became increasingly frustrated by the red tape that held up the implementation of an effective plan. So Frieden, who now runs the global healthcare nonprofit Resolve to Save Lives, proposed a new way of funding projects that are critical to Americans’ health. In an early May hearing of the House Appropriations subcommittee on Labor, Health and Human Services and Education, Frieden introduced a funding mechanism he calls Health Defense Operations. Under this budget, pandemic response projects would be exempt from budget caps, in much the same way as the United States treats additional funding to protect its armed forces. A key part of the plan: Public health experts would be allowed to ask Congress directly for appropriate funding. “Congress and the American people must understand exactly what is needed for our public health defense so that Congress can then appropriate the resources required to sustain the public health system we need to keep us safe and healthy,” wrote Frieden in a letter to Congress in May. “This is the only way we will ensure we are prepared for the next pandemic.”

On why we need a new way to fund a swift response to pandemics: Even if you’ve got a great project, it has to do battle with every other program within an agency, and every other program within the whole government. It goes up to the larger agency like Health and Human Services and does battle with really wonderful programs like Head Start, or cancer research. And then it makes it over to the Office of Management and Budget, where some 27-year-old, who’s never run a program, makes the budget spreadsheet add up. And then it gets turned over to Congress, which pretty much ignores all of that, and bases this year’s budget on last year’s— plus or minus a little bit here or there.

We have a new idea, which is to make some of the health defense operations budget-cap exempt. That requires what’s called a bypass professional judgment, which means that the experts in an area are the ones who actually provide information on what is needed in that area. The health defense operations idea is really a new idea. We’re encouraged that we have support from a wide group, as well as bipartisan support in the House. And we’re just beginning conversations with the Senate.

Blaming the CDC is like blaming a person who has been bound and encased in cement for failing to swim.

On why public health agencies must be allowed to act independently of the White House: It’s naive to say, “We should insulate public health from politics.” It doesn’t happen. All public health positions have a political component. But are there ways to avoid the kind of catastrophic malfunctioning that occurred over the past few months, and that is continuing to occur here in the United States? When I look around the world, one interesting model is in the United Kingdom: They have a chief medical officer who is appointed for a term that spans administrations. You can imagine a system that appointed either the CDC director or someone else and had that individual for a five-year renewable term, so they would span administrations and, in theory, be less, less reluctant to speak out. That happens in the UK. The problem is that there are lots of things that an administration can do to someone besides tell them to be quiet. They can cut their budget, for example.

On why we need to make it easier to track people down in our healthcare system—without compromising their privacy. Fundamentally, it’s very hard to know who is who in our healthcare system. So if John Smith comes in with a COVID test that’s positive, and says he exposed eight people, it’s really hard to find him and other people. That is something that has to be addressed in a way that is entirely transparent to people and protects confidentiality and privacy, and doesn’t lead to people avoiding care if, for example, their immigration is status is not clear. We don’t have that, and it’s one of the fundamental problems in why we have trouble with infectious disease outbreaks.

On why we need to scale up our global work: This is very important. One of the things that my organization does is advocate for funding for global health security and help countries actually spend that money well—because ultimately, most of the threats will come from elsewhere. And it will be both cheaper and more effective to stop them at the source rather than wait until they get to our shores. If countries are stronger, then we’re safer here.

On the CDC: Blaming the CDC is like blaming a person who has been bound and encased in cement for failing to swim. CDC has not communicated on this well because they have not been allowed to communicate with us. And anyone who doesn’t understand that doesn’t understand how government works. CDC would have loved to be giving daily briefings with one of the top experts. And they did that. And it said exactly what was happening exactly when it was happening in exactly the right language. On January 26, Nancy Messonier said, we have to act, we have to behave as if this is a pandemic. On February 26, she said, disruption to our everyday lives may be severe. This was exactly right, exactly the right thing to say, at exactly the right time. And they were basically told to be quiet after that. So I think that the issue is not so much: “Why didn’t CDC do what it was supposed to do?” But “Why wasn’t CDC allowed to do what it could have done?”