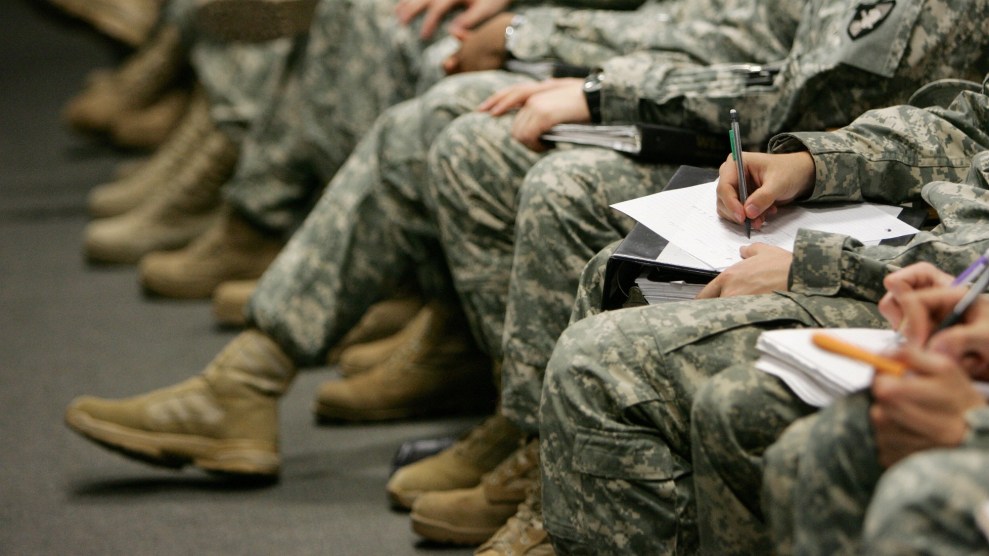 West Point did not need to have an in-person graduation ceremony this year. The nation’s oldest military service academy had its cadets leave campus in March as the coronavirus outbreak began spreading across the United States, especially in New York, which has more than twice the amount of infections as any other state.

But President Donald Trump insisted on giving an in-person speech to the 1,000-person graduating class for the June 13 commencement, forcing Army leaders to scramble their plans and summon cadets back to campus. On Monday, the Army completed a screening of all returning graduates and announced that 1.5 percent, about 15 or 16 students, had tested positive for COVID-19.

“This was anticipated,” Army spokesperson Emanuel L. Ortiz said in an emailed statement. “None were symptomatic, and no cadet has contracted through person-to-person contact while under the Army’s care.”

Even if a few positive tests were inevitable, Trump’s insistence on speaking in person was not. In March, as West Point leaders discussed whether to return students currently on spring break to campus, Trump abruptly announced his intention to attend the ceremony. The New York Times reported that academy officials “were taken aback by the impromptu announcement” and were forced to improvise after Trump “preempted their planning.”

There is no reason for Trump to gather the cadets in person for a commencement address. Secretary of Defense Mark Esper addressed Naval Academy graduates virtually last month and even the Air Force Academy, which controversially kept seniors on campus during the outbreak, welcomed Vice President Mike Pence for a commencement event where social distancing protocols were in effect and zero spectators could attend.

Trump evidently expects a similar ceremony with more pageantry at West Point, the only service academy he has not yet addressed as commencement speaker. In April, he told reporters that he assumes the academy will “have distancing” at the event, unlike the “nice and tight” commencements of years past.

Presidents from Theodore Roosevelt to John F. Kennedy have traveled to West Point to speak at commencement, and Trump is not one to forgo the pageantry of a commander in chief addressing his troops. Lt. Gen. Darryl Williams, the academy’s superintendent, told reporters at the Pentagon that returning cadets will be “segregated the entire time” into five cohorts and no cohort will intermingle for 14 days. “They’ll eat separately, they’ll live separately,” he said.

The Army has struggled to justify Trump’s decision, which requires hundreds of future soldiers to return to a region of the country that has been hit especially hard by the coronavirus. Ryan McCarthy, the Army’s top civilian leader, said cadets would have needed to return to campus anyway “to begin the process of the physicals they need, to take all of their clearance procedures, to clear barracks, get their personal items.” But that process could have been spaced out in a way that would have ensured greater safety for cadets. Even academy alumni and parents were reportedly stunned by the decision. “There is no military need to do this,” Jason Fritz, a 2002 West Point graduate, told the Washington Post. “This is a logistics nightmare, all just so the president has an audience to give a speech he wants to give.”

The commencement speech has sparked an uproar on the West Point Parents Facebook group, where most posts tend to be anodyne calls for support for cadets and the Army. In a thread announcing Trump as the graduation speaker that appeared in April, when the decision was announced, several posters blasted the decision as both narcissistic and dangerous. “PLEASE PLEASE do NOT let your children go back for graduation. It’s not worth their health or yours,” one person wrote. But others contextualized Trump’s mandate by comparing it to a typical order from a commander in chief, including ones that send cadets off to war. “For those who have not yet done so, use this time of social distancing to come to terms with the choice our children have made,” another parent suggested, “and realize that this choice will likely put them in harm’s way in some way, shape or form.” Including on graduation day.