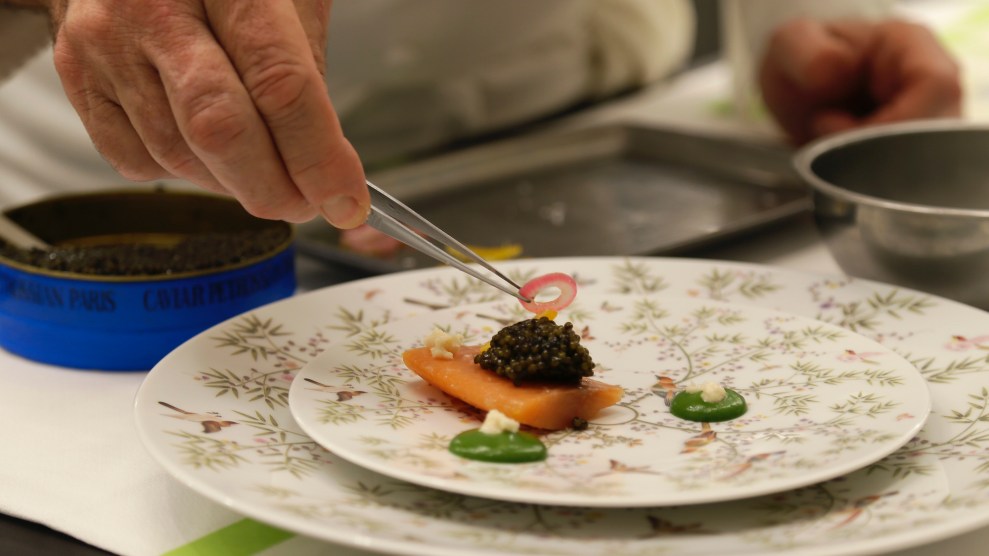 In this 2017 photo, chef Thomas Keller puts the finishing touch to a caviar dish in the new kitchen at the French Laundry restaurant in Yountville, Calif. The celebrated chef had just opened a state-of-the art new kitchen at his famed French Laundry after spending $10 million on an extensive renovation. Eric Risberg/AP Photo

The coronavirus lockdown has put the US restaurant industry on life support. Insurance policies for business interruptions aren’t paying out. The Paycheck Protection Program (PPP), the part of the recent stimulus act available to help restaurants stay alive and keep their workers paid, has already run out of money—even though less than 10 percent of the available $350 billion went to food-service establishments. Millions of restaurant workers have been laid off.

But if you fear your favorite neighborhood eatery will be gone when the COVID-19 nightmare ends, the Trump administration has news. On April 14, it rolled out  the “Great American Economic Revival Industry Groups,” charged with charting “the path forward toward a future of unparalleled American prosperity” after the coronavirus threat ebbs.

And here’s who Trump chose to represent the nation’s diverse food and beverage industries:

In short, male execs from a bunch of corporate brands—including sugary drinks giants Coke and Pepsi—plus four white chef-owners from ultra-expensive, globe-spanning restaurant groups: Wolfgang Puck, Daniel Boulud, Jean-Georges Vongerichten, and Thomas Keller. Small establishments, like the ones that made Queens, New York, into a culinary jewel, have no representative on the committee.

Vongerichten has an active business relationship with Trump. His restaurants Jean-Georges and Nougatine are located within the Trump Hotel in Manhattan, and also supply room-service meals to guests. Vongerichten’s Trump Hotel operations recently suffered a tragedy. Jesus Roman Melendez, a Mexican immigrant who worked as a cook at  Nougatine for 20 years, died of COVID-19 in early April. Grubstreet’s Chris Crowley eulogized Melendez as the “backbone of one of New York City’s most acclaimed restaurants.”

For his part, Keller, proprietor of expense-account temples in Northern California, New York City, Las Vegas, and Miami is proud to be involved with Trump’s new group.

Honored @realdonaldtrump asked me & @danielboulud @wolfgangpuck @jeangeorges to join @whitehouse Great American Economic Revival Industry Group. Proud to work together towards a strategy where the safety of Americans is top of mind in conjunction towards economic revitalization.

It’s not clear whether Puck, Boulud, and Vongerichten share Keller’s enthusiasm. On April 16, the New York Times reported that some business leaders “had no idea” they were included on Trump’s Great American Economic Revival Industry Groups team, “until they heard that their names had been read in the Rose Garden on Tuesday night.” And “others who were willing to connect with the White House could not participate in hastily organized conference calls on Wednesday because of scheduling conflicts and technical difficulties,” the Times reported. I have reached out to Puck, Boulud, Vongerichten, and Keller to for comment, and will update this post if I hear back.

In the meantime, like so much else about the administration’s response to the COVID-19 crisis, the revival effort for restaurants looks like a typical Trump Administration move: It highlights institutions that cater to the wealthy, and corporations that have made billions by selling cheap, unhealthy food to the rest of us.