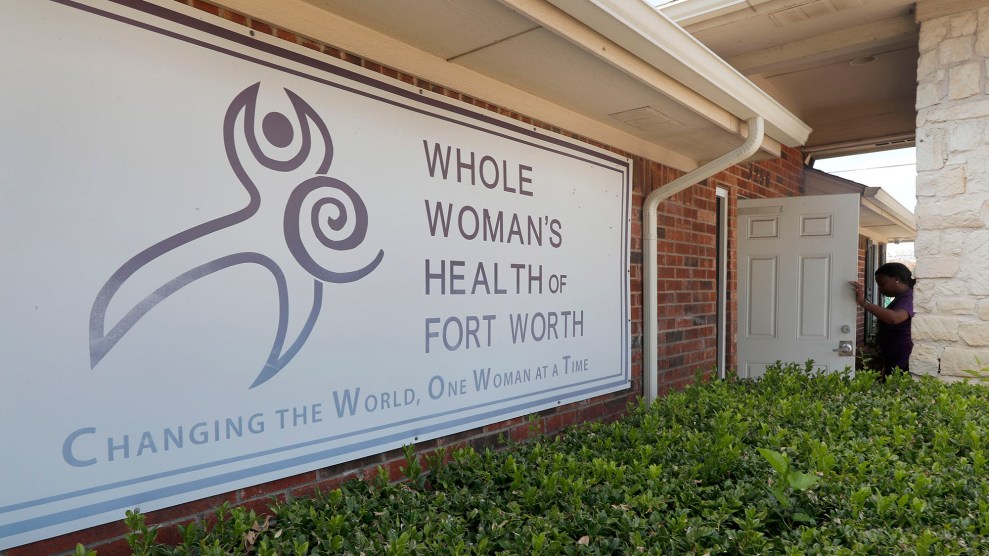 In many red states, where abortion restrictions are plentiful and doctors who are willing to perform them are not, the physicians who do ultimately provide abortions often fly into town on a regular basis, sometimes traveling hundreds if not thousands of miles to get to clinics.

This is “not simply because of the high degree of regulation,” says Carole Joffe, co-author of Obstacle Course: The Everyday Struggle to Get an Abortion in America, “but that providers just do not feel comfortable living there.”

“They don’t want their offices picketed, they don’t want their kids screamed at at school, they don’t want wacko protesters coming to their churches and bellowing at them—or worse,” explains Joffe, who is also a professor at the Bixby Center for Global Reproductive Health in the Department of Obstetrics, Gynecology, and Reproductive Sciences at the University of California, San Francisco. “By definition, it’s the states that have the most precarious level of provision that are dependent on these out-of-state docs.”

The providers “are true heroes—we worry about a day when they won’t be able to provide anymore.”

This setup has to be carefully coordinated in the best of times. During a pandemic, it’s downright precarious. As a Guttmacher report released earlier this month predicted, “In places that already have a limited number of providers, this will put an extreme strain on the capacity to serve patients, especially for non-emergency care.”

At the National Abortion Federation, a professional association for abortion providers, staffers have been helping facilitate these moves for years, matching physicians who live in states like California and New York to clinics in states like Texas, Indiana, and Ohio, which are hostile to abortion rights. This requires them to navigate an intricate web of restrictions that varies from state to state, meaning abortion providers can’t swoop in to serve clinics at random. In some states, for instance, physicians must have specific credentials within that state to practice, and insurance coverage for each doctor must also be considered.

But now, as the Very Reverend Katherine Hancock Ragsdale, who leads NAF, warns, “We are beginning to hear about places that are having a shortage of doctors. A lot of abortion providers are also older, so we’ve got folks who are in dangerous demographics themselves.”

She adds, “We’re finding this across the board, people who have other health conditions that compromise their immunity or have families that are just flipped out.”

These doctors may also be facing shelter-in-place orders in their home states, even while their faraway patients need critical services. Ragsdale knows of at least one clinic that relies on seven traveling physicians. The clinic has been able to recruit a provider to travel in and help out in the short term, but how the clinic remains open beyond the next couple of weeks is still in question. Another clinic, Ragsdale says, has closed altogether because the provider has a health condition and cannot risk exposure.

“We’re trying to do everything we can to keep the clinics open and functioning,” Ragsdale says. “[The providers] are true heroes—we worry about a day when they won’t be able to provide anymore.”

Things are particularly dire in Texas, where many clinicians fly to work and where last week Gov. Greg Abbott essentially outlawed abortion in the state as a procedure that is “not medically necessary.” While the status of the ban is in flux—on Monday, a court halted it until April 13, but earlier today, Texas Attorney General Ken Paxton filed a stay to the 5th Circuit to reinstate the ban. Planned Parenthood of Greater Texas reports that they were forced to cancel 261 procedures since Abbott’s announcement last week; Amy Hagstrom Miller, president and CEO of Whole Woman’s Health, tells Mother Jones that her three Texas clinics turned away at least 150 patients during that time. Hagstrom Miller also notes that one physician who lives in California and travels to one of the Texas clinics to work has committed to staying in the state for a few weeks to eliminate the risk from going back and forth. Dr. Ghazaleh Moayedi, who lives and works locally in Texas, says she has seen some of her peers make similar decisions, deciding to remain there instead of traveling home to their families for fear of getting stuck away from their patients. Others, Moayedi says, have been driving long distances between homes and clinics to avoid airplanes and self-isolate while still continuing to work.

Moayedi, for her part, is taking everything day by day, but she admits to feeling a certain amount of fear. “I’m concerned about physicians who travel here not being able to continue to travel, and I’m concerned about the burnout and stress being put on all of our colleagues—the physicians, the nurses, and our staff,” she says wearily.

I'm the only actively practicing #abortion provider *living in* my community that provides care to the legal limit. The only. All others fly-in. The reality of what this means in #CoronavirusPandemic is making me twitch a little….I have to keep providing & I cannot get #COVID19 pic.twitter.com/CLAD9jhXRE

Amid all this new uncertainty, NAF is doing its best to fill in the holes. It’s fast-tracking a partnership it was working on with Planned Parenthood before the pandemic, which will match clinics with not just doctors, but also nurses, receptionists, and counselors from around the country; it was initially conceived as a contingency should the Supreme Court rule against clinics in the upcoming June Medical Services v. Russo case, which is scheduled for a decision this summer, but the plan has been accelerated to try and meet current needs.

Ragsdale also notes the NAF hotline is staying in near-constant communication with the clinics in its network as a stopgap, moving around patients and appointments as needed and if possible. “It’s really an all-hands-on-deck, double-time moment for us,” she says.

“I’m concerned about the burnout and stress being put on all of our colleagues—the physicians, the nurses, and our staff.”

The crisis has led to near-constant communication among many providers, adds Moayedi. Group texts and email threads discuss how best to screen patients for the virus before their appointments; social distancing in the waiting room; spacing out appointment times; and managing anxieties during a massive health crisis. It’s an amped-up version of a camaraderie that has long existed in reproductive care, as the field has been plagued with legal challenges and unnecessary restrictions for decades.

“Our work is constantly in crisis,” she says. “It’s definitely extra stressful, but this is not something that abortion providers are new to—we are experts at working in crisis, being nimble, being creative, and providing care in the most extreme circumstances.”

For now, similar bans Ohio and Alabama are on hold, and providers are fighting in court to protect access in Iowa and Oklahoma, which have also issued directives that classify abortion as nonessential care. While Massachusetts, Maryland, Colorado, Washington, New York, Illinois, New Jersey, Minnesota, New York, and Hawaii have declared abortion care essential at the time of publication, it remains to be seen how many more states will follow their lead—or that of Texas.

“Abortion is not something that can be indefinitely delayed—you need access to health care,” Ragsdale emphasizes. “You can’t put it off until the situation’s cleared itself up.”