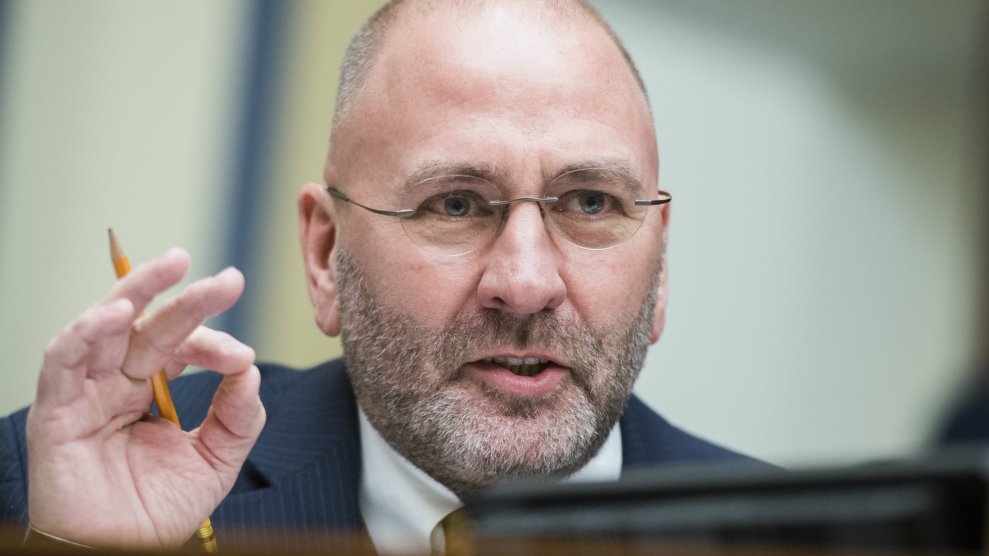 On Tuesday, Rep. Clay Higgins (R-La.) posted a picture of armed Black demonstrators on Facebook and captioned it with a threat: “I’d drop any 10 of you where you stand.” Facebook quickly removed the post for inciting violence, but the point was clear. Louisiana is an open carry state and Higgins is a big proponent of gun rights. Yet he thinks Black people exercising their Second Amendment right in a peaceful protest is a threat to be eliminated. As he assured anyone who was paying attention: “We don’t want to see your worthless ass nor do we want to make your mothers cry.”

Higgins certainly has an appreciation for law enforcement. He’s a former police officer, who, according to his Congressional profile, “worked patrol, primarily night shift, and he was a well-known SWAT operator. Prior to joining Congress in 2017, Higgins is best known for his Crimestopper videos for the St. Landry Parish Sheriff’s Office.”

The third district that he has represented for the last three years has been pounded by several crises. Late last month, after Lafayette, Louisiana, police shot and killed 31-year-old Black man Trayford Pellerin, residents took to the streets in protest. Last week, Hurricane Laura tore through southwest Louisiana killing 14 people, leaving 350,000 without power and more than 150,000 without water, only adding to the economic crisis caused by the pandemic that is being felt acutely in one of the nation’s poorest regions. Many of those who were affected by the hurricane include residents of Higgins’ overwhelmingly white district; according to the 2010 census, 760,000 people lived in the third district, and their median household income was $41,000.

Instead of worrying about the widespread devastation, the pandemic, and the real needs of his constituents, who include Lake Charles residents who suffer from high rates of poverty, Higgins was focused on Louisville, Kentucky. Black armed demonstrators there were marching for Breonna Taylor, the EMT who was shot and killed in March by Louisville Police while she slept in her bed. “Nothing personal. We just eliminate the threat,” Higgins’ post read according to the Advocate. “We don’t care what color you are. We don’t care if you’re left or right. if you show up like this, if We [sic] recognize threat…you won’t walk away.” It was a brazen display of a double standard. After Facebook removed the post, Higgins posted a follow-up message.

No, I did not remove my post.
America is being manipulated into a new era of government control. Your liberty is…

“I suggest you get your mind right,” he continued. “I’ll advise when it’s time gear up, mount up, and roll out.”

It’s no secret that many white gun owners only support open carry and gun rights for themselves. But in the past, gun rights advocates wouldn’t broadcast that they considered Black people with guns to be a danger, whereas white people packing heat were just freedom-loving patriots. But, thanks to the relentless incitement by President Donald Trump, armed white people are increasingly seeing themselves as above the law and are unapologetic about bragging about it.

Higgins’ post is yet another instance that proves that many conservatives don’t really want law and order, what they want is impunity to inflict violence. As I explained last week:

The organizing principle seems to be that there are laws and a social order to adhere to, and if you dare violate either by defying a police officer’s orders or some other social rule, you may have to pay with your life. That is, if you’re a person of color. For armed and aggrieved white men and occasionally women, apparently, a different set of rules apply.

After Kyle Rittenhouse, an 17-year-old white vigilante killed two protesters in Kenosha, Wisconsin, and was subsequently charged with murder, Donald Trump and the conservative apparatus defended him.  Some even hailed him as a hero and a Christian website raised $237,000 for his defense. To them, Rittenhouse was boldly protecting people and property and helping maintain law and order, thus sending very clear signal to millions of aggrieved racists. As I wrote:

But as this era of pervasive corruption, state-sanctioned violence, and a pandemic that’s killed nearly 180,000 people makes abundantly clear, the harshest punishments for violating “law and order” are only doled out to certain people in certain places. When Trump and other right-wingers say they want “law and order,” they’re really sending a signal—less a dogwhistle than a bullhorn—to the other people guided by white supremacy: Break any law you want to maintain the current order.

If a 17-year-old committing a deadly crime can be considered a win for law and order, it only makes sense that a sitting member of Congress can openly threaten to kill Black protesters. Apparently, that’s how heroes are made.