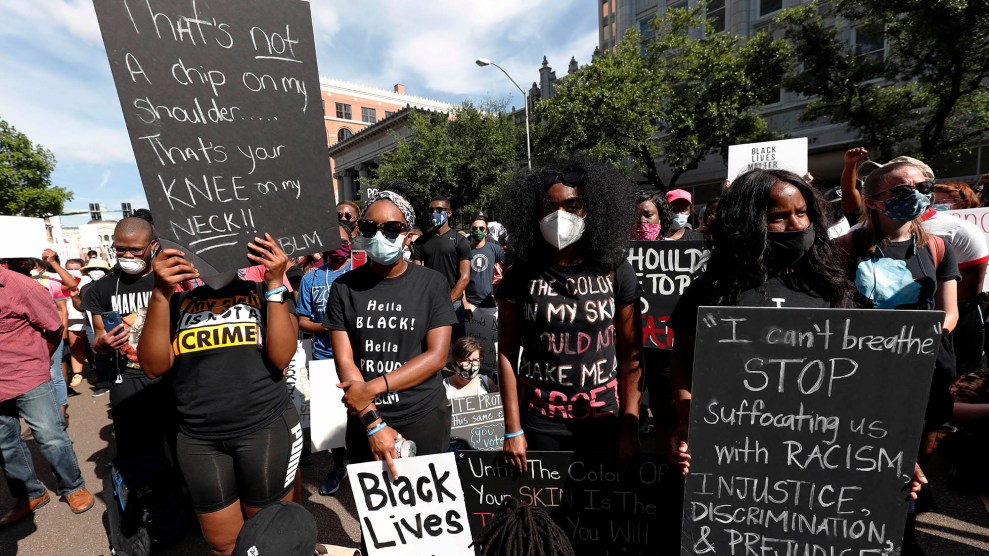 Hundreds of protesters stand in silence for almost nine minutes in response to the recent death of George Floyd in police custody, Saturday, June 6, 2020, in Jackson, Miss.Rogelio V. Solis/AP

There’s no doubt that the anti-racism protests sparked by George Floyd’s killing have been powerful, and now the movement may finally pry the Mississippi state flag—the last of its kind to still bear Confederate symbolism—from the strong stubborn hands of conservative lawmakers who have long defended its existence.

Mississippi Today is reporting that a bipartisan effort is brewing in the legislature to adopt a new design, known as the Stennis flag, in place of the current one, which has been in place since 1894. The lawmakers have the blessing of House Speaker Philip Gunn, a Republican who spoke up in support of changing the flag in 2015, after a white supremacist murdered nine congregants at a Black church in Charleston—a horrific event that reignited an effort to do away with symbols that glorify this country’s Confederate past.

Though bills are filed annually in the state House and Senate to change the flag, they tend to die out in committee. But now, there’s momentum; this brewing resolution represents the first substantive step toward that effort since 2001, when Mississippians voted 2-1 to keep the current flag in a state referendum.

Suspending the rules to consider the change would require a two-thirds of the current House members (80 out of 120 current members). Gunn told the lawmakers he would ensure the resolution passed through House committee if the lawmakers could secure verbal support from around 30 Republican members this week.

Adding the potential Republican commitments to the 45 votes of the Democratic caucus, the House would be within eyeshot of solidifying a two-thirds, veto-proof majority to change the flag.

After the meeting with Gunn, several lawmakers began calling their colleagues and whipping votes on Monday afternoon, though some expressed doubt they could find 30 solid commitments from Republicans.

If the House were to pass the resolution to change the flag, it would move to the Senate for consideration. Lt. Gov. Delbert Hosemann, who presides over the Senate, said during his campaign last year that voters, not the Legislature, should decide the fate of the state flag.

But several state senators told Mississippi Today this week that they believe Hosemann, a moderate who has maintained close working relationships with leaders of the Legislative Black Caucus, could be open to the idea of legislative action, particularly during this moment of protest across Mississippi and America.

The bill would still need to get the final approval of Gov. Tate Reeves, who, Mississippi Today explains, “sidestepped several questions about his personal views on the state flag during a press conference. Reeves did say, however, that he believes Mississippians, not lawmakers, should decide the issue at the ballot.”

This new movement follows massive protests last weekend against police brutality and racial inequality across the state, from Jackson to Hattiesburg to Tupelo to Starkville. Democrat Mike Espy, who will challenge Republican Sen. Cindy Hyde-Smith again this year, attended the Jackson protest, which was at least  3,000 strong. Small towns in the state also participated in the protests.

Meanwhile, the state’s neighbor to the north, Tennessee, is doing its best legislative maneuvering to take steps in the opposite direction and protect a bust of Nathan Bedford Forrest, a Confederate general, slave trader, and first Grand Wizard of the Ku Klux Klan. I’ve written about my home state’s unwillingness to let go of Forrest’s likeness and his name before. One step forward, a Tennessee waltz back.