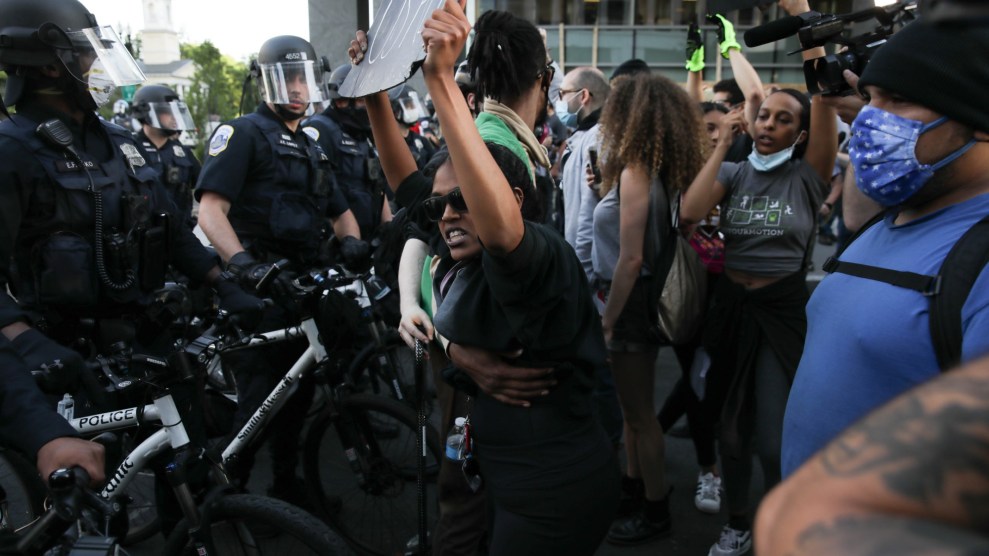 The events that transpired in Washington, DC’s Lafayette Park on June 1—in which US Park Police assaulted peaceful protesters so that President Trump could pose for a photo op in front of a church—have drawn universal outrage. But during a House hearing on Monday to investigate the incident, Republicans used the opportunity to defend Trump’s order to attack peaceful protesters, repeatedly downplaying the incident and using misleading video clips of unrelated protests to justify the police response.

Kishon McDonald, a Navy veteran who was among the protesters attacked by police in the June 1 demonstration, testified before the Committee on Natural Resources that demonstrators had been neither violent nor confrontational before police began firing rubber bullets and chemical irritants into the crowd. “Using weapons on us was ridiculous and just made the situation dangerous, even though before the officers charged us or fired their weapons it had been peaceful,” he said in his testimony. “It’s citizens who are being attacked by our own government just for asking and protesting for change.”

In response to McDonald’s testimony, Rep. Tom McClintock (R-Calif.) turned to a video that deceptively used footage from other protests—including footage of ones that took place weeks after the June 1 demonstration—to argue that there was a precedence to expect that protesters would turn violent. “Describing the protests in DC as mostly peaceful protests is like describing Scott Peterson as a mostly faithful husband,” McClintock said, making a weird comparison to the man who was convicted in 2004 of murdering his pregnant wife, Laci Peterson, because of his affair with a massage therapist.

When examining the events that occurred in Lafayette Square, it is important we recognize the full picture.

Congressman @RepMcClintock referenced a video in today's hearing that shows exactly what Park Police were confronting in Washington, D.C. pic.twitter.com/76yS622Nia

Among the other witnesses who testified in the hearing was Rev. Mariann Budde, the Bishop of the Episcopal Diocese of Washington, who spoke about the experiences of the parishioners at St. John’s Church—the site of Trump’s now infamous photo op—who were supporting protesters prior at Lafayette Park throughout the day. Budde called out the popular GOP talking point of justifying violence against protesters because of the instances of rioting, looting, and vandalism—including the small fire that was set at St. John’s. “It would be unforgivable to allow this moment to slip away because our building was damaged,” she said. “We care deeply about our churches—many of which are older than our nation itself. But in the end, buildings can be re-built. Windows can be replaced. Pillars can be re-painted. We can never bring back the lives that have been lost due to senseless police violence.”

Amelia Brace, an US correspondent for Seven News Australia, testified about her experience on June 1. As police began push back protesters in Lafayette Park, she described how officers attacked her and her news crew even after they identified themselves as members of the media and were trying to get away from the chaos. “As I was running away, I felt something strike me hard across the back and shoulders,” Brace recalled. “I now know, from seeing the local news crew’s footage, that a third US Park Police officer reached around the second officer to smack me with his baton in a backhanded motion as I was running away.”

George Washington University law professor Jonathan Turley—known for his role as the House GOP’s legal witness during Trump’s impeachment inquiry hearing—again testified on behalf of Republicans to argue that the Park Police’s operation to clear Lafayette Park for Trump’s photo op was lawful. But even Turley conceded that what happened to Brace and her news crew, which caused an international rift with the Australian government, appears to have been unlawful action. Still, that didn’t stop Rep. Dough Lamborn (R-Colo.) from clumsily arguing that the police’s treatment of journalists in the Lafayette Park incident pails in comparison to how some protesters have treated media at other protests.

“Journalists should be able to do their job,” said @RepDLamborn.

Media in Washington, D.C. have been targeted. @FoxNews reporter @LelandVittert described being the most scared he has been since being chased out of Tahrir Square by the Muslim brotherhood. pic.twitter.com/sQNkoE4SxM

Rep. Rob Bishop (R-Utah), the committee’s ranking GOP member, called the hearing “political theater” because no members of the US Park Police were present to testify. “The Democrats here have now produced something that’s not going to be substantive, that is not going to be historical, that is really a distraction,” Bishop said. But Lamborn later cited a letter from the Park Police explaining that no one came to testify because they didn’t feel it was legally appropriate for them to testify on the same panel with someone suing them (McDonald is one of the plaintiffs in a lawsuit filed by the ACLU of DC and Black Lives Matter DC against the Trump administration over the Lafayette Park incident).