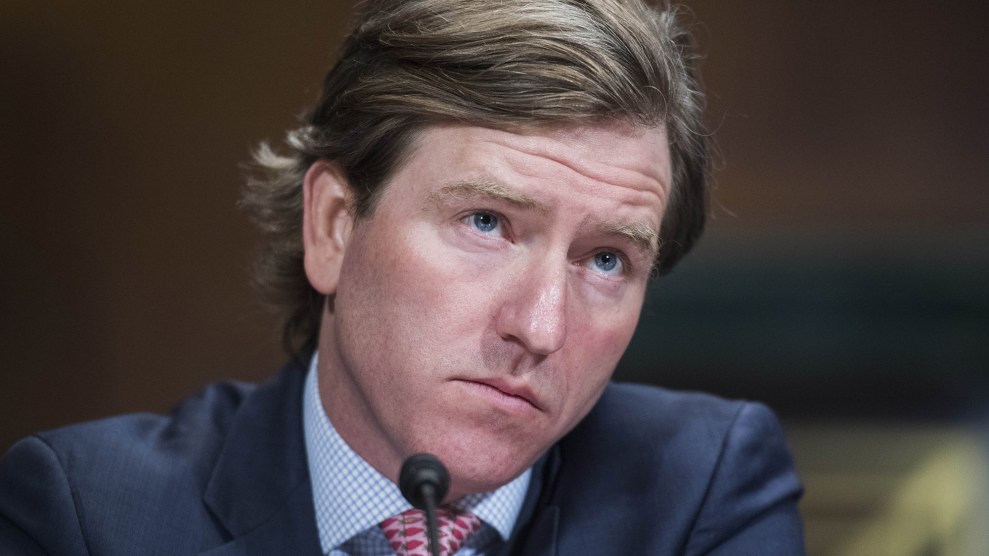 Christopher Krebs, director of the Department of Homeland Security's Cybersecurity and Infrastructure Security Agency, testifies during a Senate Judiciary Committee hearing on May 14, 2019. Tom Williams/Congressional Quarterly/Newscom via ZUMA Press

President Donald Trump fired one of the US government’s most senior officials responsible for cybersecurity and election security in a Tuesday night tweet—a move that’s been widely expected for days, as the official, Chris Krebs, led the effort to loudly debunk some of the president’s most outlandish claims about election irregularities after Trump’s Nov. 3 loss.

Trump appointed Krebs, a former Microsoft executive, as the inaugural director of the Department of Homeland Security’s Cybersecurity and Infrastructure Security Agency (CISA) in 2018, designating the agency as the focal point for government cybersecurity issues. Election security was a major focus for Krebs and his team over the past two years, and the work largely managed to fly under the radar of a president who is hyper-sensitive to any discussion or action related to election security, for fear that the subject draws focus to the Russian election interference operations in 2016.

That changed recently as Krebs and other agency officials became more vocal in swatting down inane election-related conspiracy theories and defending the integrity of the November election. A rumor control page from CISA told readers that no, dead people were not, in fact, casting ballots, and the fact that results aren’t available on election night does not make them fraudulent. As noted by Politico, Krebs’ Twitter account was more direct in its rebuttals of election-rigging claims from the president and his allies.

On November 12, CISA and a group that includes secretaries of state, election directors, and election equipment vendors, issued a statement saying the “November 3rd election was the most secure in American history,” and added that “there is no evidence that any voting system deleted or lost votes, changed votes, or was in any way compromised.” This of course was in direct conflict with the president’s baseless and plentiful claims of widespread election fraud.

It’s probably no surprise then that in firing Krebs, Trump explicitly referenced this statement, claiming it was “highly inaccurate, in that there were massive improprieties and fraud – including dead people voting, Poll Watchers not allowed into polling locations, ‘glitches’ in the voting machines which changed votes from Trump to Biden, late voting, and many more.”

A spokesperson for the agency did not respond to a request for comment Tuesday night. Shortly after the president’s tweet, Krebs tweeted from his personal account:

Honored to serve. We did it right. Defend Today, Secure Tomrorow. #Protect2020

Krebs’ firing was quickly followed by strong reaction from those who watch the election security space. Sen. Amy Klobuchar (D-Minn.), one of the Senate’s most active members on election security matters, called the firing a “gut punch to our democracy.” Sen. Ron Wyden (D-Ore.), a longtime election security advocate, tweeted that “Trump fired a government official for telling the truth so he can accelerate his lying about the election.” Last week, when Reuters initially reported that Krebs’ job was in jeopardy, Wyden tweeted that Trump was “preparing to spread lies about the election from a government agency.” Rep. Adam Schiff, (D-Calif.), the chair of the House Intelligence Committee, called the firing “pathetic, but sadly predictable.”

Krebs and his team got a lot of credit for their nonpartisan approach to election security coordination between states and local jurisdictions, which actually run elections, and the federal government.

“It is disheartening that in the dwindling days of this presidency, in the midst of a global pandemic that is surging rather than abating, that the outgoing president is using his time to dismantle government agencies and attack dedicated public servants,” Tammy Patrick, a longtime election administration and security expert, told Mother Jones Tuesday. “The totality of what we are seeing, not just this firing, is dangerous and continues erode our democratic norms. Those who sit idly by and enable this behavior are culpable.”