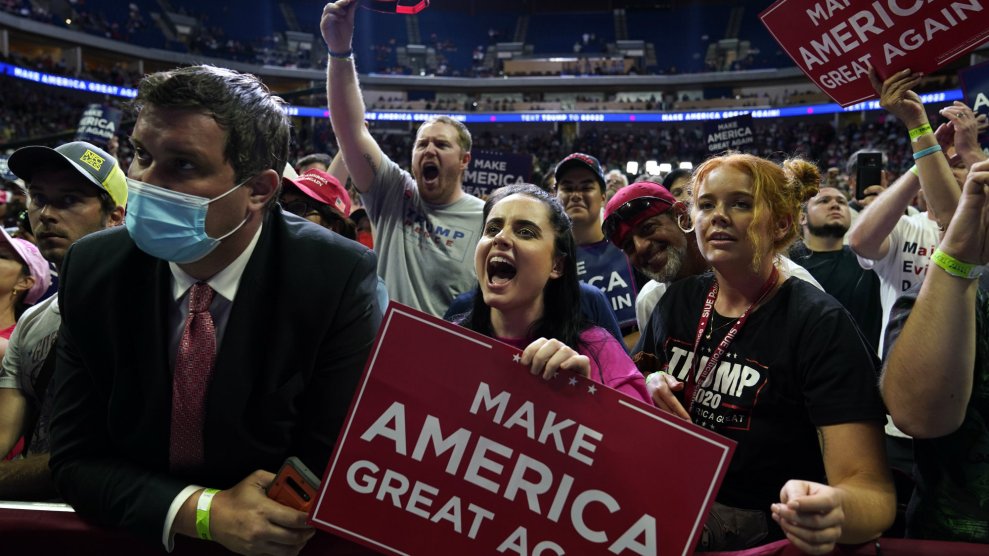 Florida was supposed to be the canary in the coal mine—except in a good way for Democrats. If the perennial swing state went blue this cycle, President Donald Trump’s chances at reelection would crumble and former Vice President Joe Biden would ride the blue wave to the White House. One of the assumptions was that a growing Latinx electorate would work in Biden’s favor, especially in the heavily populated Miami-Dade County.

Not soon after Florida’s polls closed on Tuesday night, it became obvious that voting in Miami-Dade was dashing Democrats dreams of a quick decisive victory. While Hillary Clinton had won the county with 63 percent to Trump’s 33 percent in 2016, as of Wednesday night, Biden was only leading Trump 53 to 46. By 12:30 a.m., the Sunshine State’s 29 electoral votes would once again go to Donald Trump.  Immediately, recriminations from liberals in Slack channels and group texts across the country began. What went wrong? Or more precisely, Who’s to blame?

Because Florida is such a large electoral prize and home to 4.3 million Latinx people, Trump approached the state very strategically. He cultivated a base by galvanizing conservative voters from Cuba and Venezuela in particular by asserting that Biden is a socialist. Even though Trump has spent the last four years denigrating the Latinx community with racist remarks and demonizing immigrants, especially those from Spanish speaking countries, these factors did not bring many of those voters to Biden in Florida.

That early loss killed the Democrat’s chances of a landslide, but it brought to life a variety of explanations for what happened, especially his poor showing with Cuban American voters. South Florida Democrats had warned the Biden campaign wasn’t doing enough to attract Cuban American voters—and now these voters were being blamed for costing the former vice president the chance for a historic landslide.

The narrative has been set by Florida- had it not been for Biden’s bombing with Cuban Americans he’d have likely won the stage and the narrative would have been a gradually emerging convincing Biden win.

Implicit in this analysis is the assumption that Latinx voters should be reliable Democrats. If only those voters had checked the box for Biden, the race would be over by now. But the rush to explain Biden’s loss, in part, along racial lines ignores two things: First, the Latinx community includes vast array of people, an enormous amalgamation of different groups from many different countries and cultures. And then, it seems to underplay the fact that white voters are largely responsible for the Trump presidency. Why do Cuban American voters have to save you from your white aunts and uncles?

Trump is a racist. Add to that, he’s been credibly accused of sexual assault by a stunningly long list of women, spent much of his first term grifting American taxpayers, and has repeatedly demonstrated his unfitness for office. His catastrophic handling of the coronavirus has made the United States home to the world’s highest death toll, and the ensuing economic calamity has left 8 million people in poverty. When racial justice protests swept the country, Trump threatened protesters, gassed peaceful ones, and encouraged his supporters to attack them in the streets. Conventional polls, wisdom, and punditry assumed all of these disasters combined would lead to a swift and humiliating defeat for the incumbent. A defeat may indeed be in the cards, but his strong showing demonstrates clearly that the lure of white supremacy should never be underestimated.

Trump’s defeat may indeed be in the cards, but his strong showing demonstrates clearly that the lure of white supremacy should never be underestimated.

It’s too early for 2020 data as exit polls are largely useless. But 2016 data shows us that 54 percent of white people voted for Trump, compared to 6 percent of Black people and 28 percent of Latinx voters—many of whom are white people. Fast forward to 2020. According to the Washington Post, more than 68 million people have casts ballots for Donald Trump this year. Despite whatever gains, if any, he may have made among voters of color, it’s safe to say that the majority of those ballots were cast by white people. AP data reveals his supporters were the ones who said the economy was their top concern, as opposed to Biden voters who were more worried about the coronavirus. The immediate reaction to Florida was for many liberals to focus on a racial group, but why not focus on the one that consistently goes so hard for Republicans? The country’s largest racial group could also be seen as a voting bloc.

This is not to let voter suppression, disenfranchisement, misinformation efforts, and Biden campaign failures off the hook. After all, Florida passed a $15 minimum wage, a progressive ballot initiative, despite going for Trump. One line of retrospective analysis suggests that Biden might have been able to win the state if he simply campaigned on raising the minimum wage. How likely is that?

It’s important to note that despite the rush to find a place to lay blame for Biden’s loss in Florida, we still don’t know who will win the presidential contest. But voters of color have already handed him big wins. In Arizona, as my colleague Fernanda Echavarri wrote, should he finally win, Biden has Latinx activists to thank:

Latinos make up nearly a quarter of the state’s eligible voters. As I recently wrote, Arizona’s slow leftward march is a result of a decade of grassroots work by Latinx organizers and activists—not necessarily to support the Democratic Party, but to protect their own community. A generation of Latinos was galvanized when Arizona passed SB 1070 in 2010, the extreme anti-immigration measure that would become known as the “show me your papers” law.

And there is emerging evidence that Black voters will have put Biden over the finish line. In Michigan and Wisconsin, two states Trump won in 2016, flipped to blue after votes in Detroit and Milwaukee, cities with large shares of Black voters. Anticipating that Philadelphia voters of color may tip the results in the crucial swing state of Pennsylvania, Trump falsely claimed premature victory there and is filing a lawsuit to stop the counting.

And yet, for some, the focus still remains on the nonwhite voters who supported Trump.

Trump just won the highest share of non-white support of any Republican in 60 years. The Democratic Party is an absolute joke.

It’s time for the white community to turn their voting critique inward. Donald Trump is president because droves of white people voted for him in 2016. Biden did not win 2020 in a landslide for the same reasons. While the discourse often includes half-baked and shallow narratives for Brown and Black voters and how those communities simply didn’t do enough, the other question deserves even greater scrutiny: How many people in your community voted for him and aren’t they the real problem?  For decades, nonwhite voters have been treated like a monolith, pushed into silos and not seen in their infinite variety of personal, political, and societal priorities. Maybe it’s worth shifting the perspective and re-examine what it means to be a different kind of monolithic voting bloc.

Tens of millions of Americans still chose Trump. An honest assessment of who we actually are as a country can’t happen until the white vote, yet again, is addressed. After 2016, white working class voters the Democrats abandoned become an object of obsessive focus. Who are these people and how did the Democrats forget about them? But today, when Trump’s presidency isn’t a fantasy of finally making America great again for the forgotten men and women, but rather years of grim realities, tens of millions of people have taken stock of the catastrophic handling of the coronavirus pandemic that led to 234,000 deaths and counting, the widespread economic suffering that Trump and the Republicans have done little to reverse, and the terrifying increase of white supremacist violence and decided—this is the America they want. And that’s a problem that will endure long after Trump is gone.