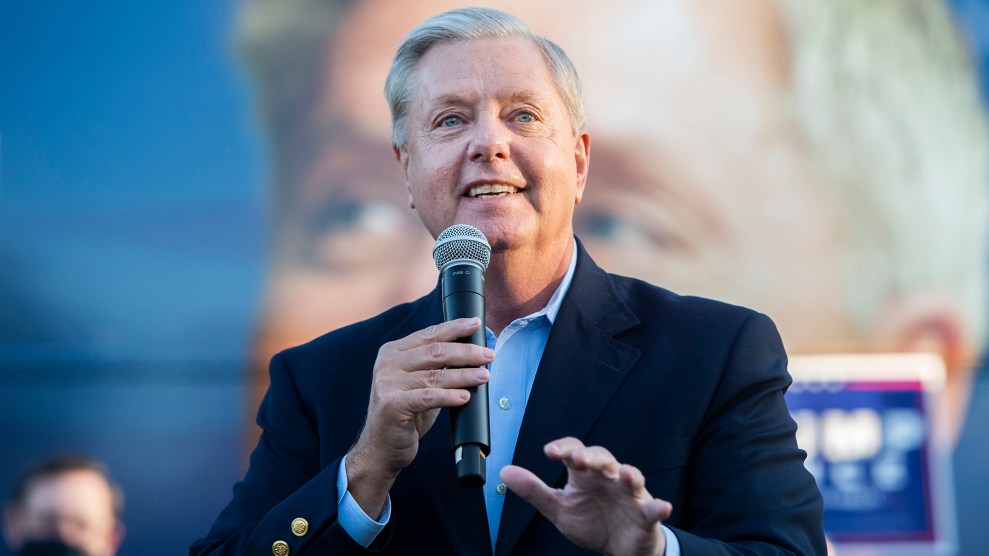 Sen. Lindsey Graham (R-S.C.) has defeated his Democratic challenger Jaime Harrison, bringing an end to a record-shattering challenge to one of Donald Trump’s most loyal henchmen.

To say Harrison entered the race as an underdog would be an understatement. He’d worked for House majority whip and kingmaker Rep. James Clyburn (D-S.C.) before chairing the South Carolina Democratic Party, but was otherwise unknown outside of the state’s small Democratic circles. That posed a challenge in a GOP stronghold like South Carolina. In Harrison’s own summation: “Running against a guy who has 95 percent name ID, and your name ID is less than 20 is, you know, even more difficult,” Harrison told me last month.

But all that time in Democratic politics left Harrison with the suspicion that his fellow operatives had overlooked the potential for Democrats to succeed in South Carolina—especially with the support of Black voters, who were often overlooked in the electoral process. Stacey Abrams, after all, had come close to winning the Georgia governorship in 2018; Sen. Doug Jones (D-Ala.) had done the impossible with a broad coalition of Black voters—a coalition brought together with guidance from Harrison, who had advised the campaign in his capacity as a Democratic National Committee associate chair. “The votes are here,” Harrison says. “The question is, can we change the mentality?”

Graham, too, was showing signs of fallibility. As I wrote in my Mother Jones cover story about Harrison earlier this year:

Over three terms in the Senate, Graham had cultivated a reputation as a staunch conservative who delivered bipartisan agreements on immigration and climate change—part of his identity as self-described “political wingman” to Arizona Sen. John McCain. (McCain had affectionately referred to his close ally as “Little Jerk.”) But three years into the Trump presidency, Graham, who said during the 2016 election that he wished Republicans had kicked Trump out of the party, has become one of the president’s main sycophants. The reversal has earned him a particularly brutal impersonation from Saturday Night Live’s Kate McKinnon, whose sweaty Graham explains in a recent sketch that “even my bodily fluids are trying to distance themselves from me.”

The about-face had been a constant source of irritation for liberals who watched as Graham, as I wrote on Tuesday, “defended his president against an impeachment vote, shuttled a late-breaking conservative SCOTUS nominee through the confirmation process, and toed Trump’s line on COVID-19.” Harrison latched onto that to raise staggering amounts of money from donors across the country:

Harrison, meanwhile, followed in his wake like an ActBlue ShamWow, absorbing liberals’ frustrations in dollars and cents. The Democrat has raised a whopping $109 million; $57 million of it flowed in from July through September alone, shattering the record for the highest quarterly fundraising total of any US Senate candidate. The mammoth amount allowed Harrison to get advertisements up on television as soon as it became unsafe for him to campaign in person. “It was important for folks to get to know who I was,” he says.

Despite Harrison’s own insider bona fides and the race’s national attention, the Democrat tried to stay focused on South Carolina. When I joined Harrison on the campaign trail last fall, he made scant mention of his opponent, only doing so in front of MSNBC-watching audiences in the Charleston suburbs who craved it. Instead, Harrison, like Democrats elsewhere, focused on health care, the economy, and, in these last few months, the Republican’s COVID response:

He wouldn’t take the bait, for example, when I asked him whether he thought Sen. Dianne Feinstein’s (D-Calif.) embrace of Graham, both literally and figuratively‚ at the conclusion of Amy Coney Barrett’s Supreme Court confirmation had hurt his case. “That’s water under the bridge for me,” Harrison tells me. “I try to leave the Washington, DC, stuff—there are enough pundits to talk about that.” He pivoted back to Graham’s failure to deliver for his state: How was it that Graham was able to rush through a Supreme Court justice but couldn’t pass a COVID-19 relief bill with the same urgency?

The Supreme Court vacancy, of course, helped resuscitate Graham’s campaign. The Senate Judiciary successfully shuttled Amy Coney Barrett to confirmation just weeks before November 3, carrying out a top Republican priority in a series of hearings that portrayed him and his colleagues as measured and reasonable.

Harrison came up short, but regardless, he achieved what he set out to do: “Getting people to believe” that the Democratic spirit “is alive and well in the South,” as he put it last fall. Close confidantes and Democratic allies would whisper that a respectable performance would be its own victory. His race, in Harrison’s estimation, “dramatically changed the trajectory of Democrats running in South Carolina, and I hope it means running in the South in general,” he told me. “This perception that we should just give up on the region, I hope we have dispelled that.”