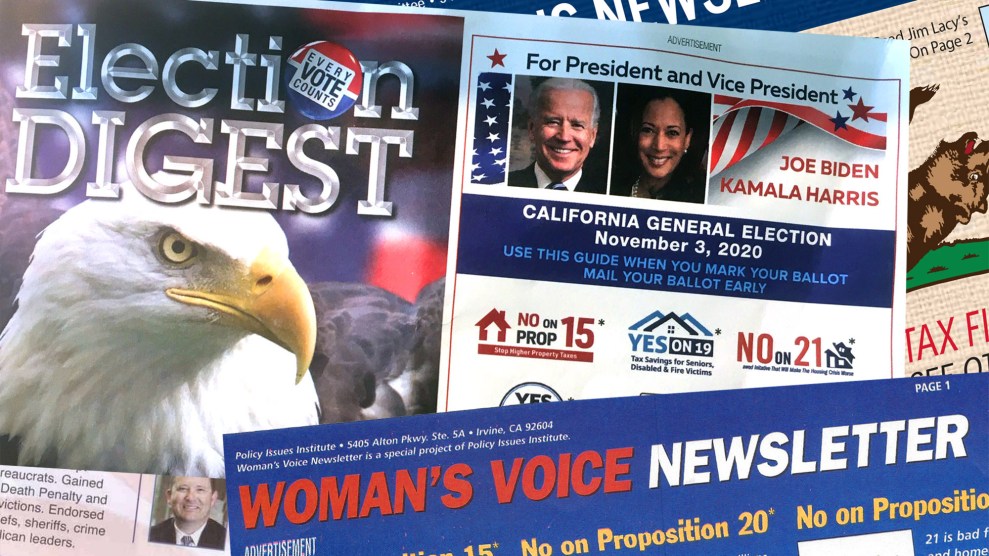 Ah, the signs of autumn in California: red-flag fire warnings, a looming drought, and high winds blowing political leaflets down the street like tumbleweeds. Normally, I would have recycled the stray election mailer I picked up in my driveway the other day, but this one caught my eye. Beneath photos of Joe Biden and Kamala Harris, the “Coalition for Literacy Newsletter” featured large endorsements for and against state propositions—most of which directly contradicted the California Democratic Party’s own positions. Next to a photo of a little girl, the mailer explained that it had been sent by “a non-profit organization devoted to promoting literacy in our schools and communities.” Huh? What the heck does telling Californians how to vote on ballot measures have to do with encouraging more kids to read?

Nothing—and that’s the point. This particular kind of junk mail has been a feature of California elections for decades. Under state law, candidates and campaigns may pay to appear on “slate mailers” that flood voters’ mailboxes in the weeks before Election Day. The consultants and organizations behind the mailings usually have no official connections to parties or advocacy groups and hide behind innocuous sounding names like the Coalition for Senior Citizen Security, Millennials for Effective Government, Hometown Voter Guide, or Woman’s Voice.

The mailers are a relatively inexpensive way for campaigns to reach lots of voters—and create the impression that they have broad support. It’s not clear how much impact they have; like a lot of direct mail, most are probably ignored. Landslide Communications, the producer of Women’s Voice and other fliers, touts a testimonial from someone who said one of its mailers “was the only one he observed a voter actually take to the polls.” A political science study from the late ’90s found that “Slate mail can be persuasive, at least in elections where voters lack alternative sources of information.”

If politics makes strange bedfellows, then California’s pay-to-play mailers are an open marriage of convenience. In 2018, Woman’s Voice’s gubernatorial pick was a Republican assemblyman who had been accused of sexual harassment. As CalMatters reports, the current crop of slate mailers includes the Committee to Protect the Political Rights of Minorities, a front for a consulting firm run by the head of the state NAACP; the COPS Voter Guide, which opposes a tough on crime proposition backed by law enforcement groups; and the Voter Education Coalition, which supports the lawmaker who wrote a labor law regulating gig-economy companies like Uber and Lyft—and also promotes Proposition 22, a ballot measure that would undo that very law.

Slate mailers must disclose who’s paid them for endorsements. Yet there’s a twist: They may also picture or list candidates and campaigns that haven’t paid to be promoted. By name-dropping a well-known or popular politician, mailers may signal that they represent a partisan slate—which explains why Biden and Harris are on the flier I scooped up—and why a slew of local progressive candidates had paid to be listed alongside them.

These unsolicited mashups can be misleading. Earlier this month, Californians received a mailer called the “Feel the Bern, Progressive Voter Guide,” which endorsed Biden and encouraged them to vote yes on Proposition 22. Sen. Bernie Sanders angrily tweeted that he had no connection with the voter guide and asked Uber and Lyft “to publicly denounce the deception.” Campaign finance records show that the mailers were produced by a group in Long Beach that had received $20,000 from the Yes on 22 campaign. (So far, the Yes campaign, which has spent nearly $200 million, has spent nearly $900,000 on slate mailers.)

Looking into the Coalition for Literacy, I found that—shocker!—it is not simply an educational nonprofit that dabbles in political advertising. In 2019, according to its tax filings, it donated $20,000 worth of books. Yet in 2020 it has taken in nearly $2.5 million for its endorsements and mailed more than 5 million pieces of mail. As a 501(c)4 group, it is allowed to engage in political activity; however, its articles of incorporation, filed with California’s secretary of state, say that it “shall not participate or intervene in any political campaign (including publishing or distributing statements) in connection with any candidate for public office.”

My peek under the astroturf also revealed some skeletons. The Coalition for Literacy operates out of an office in Torrance, California, that’s also been listed as the address of other slate mailers such as Budget Watchdogs, Educate Your Vote, Coalition for California, and the California Voter Guide. Tax and business records list Timothy Carey as one of the organization’s chief officers. In 2002, the San Francisco Chronicle caught some candidates off guard when it reported that the “direct-mailing whiz” they’d paid for mailers had been convicted of child molestation in 1992. (A few years earlier, Carey sued someone who had told his clients about his criminal record.)

In the midst of an election year when we’re drowning in undiluted streams of digital misinformation, shady mailers feel almost like quaint throwbacks. Like pumpkin spice, they’re a seasonal annoyance: Just when you’re sick of seeing them everywhere, they’re gone… until next time.