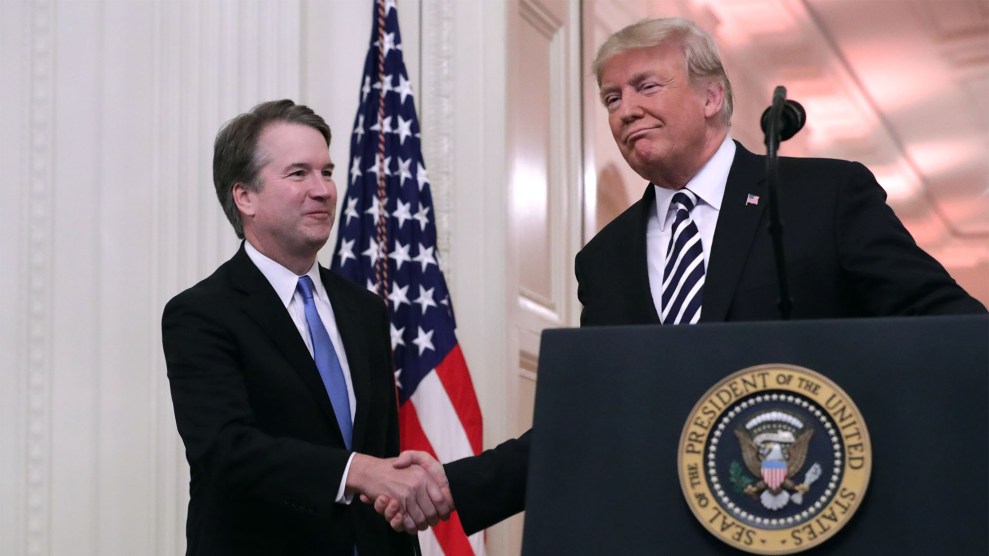 Minutes before the US Senate confirmed Amy Coney Barrett to the Supreme Court on Monday evening, the court issued a 5-3 decision to throw out mail ballots in Wisconsin that are postmarked by Election Day but arrive afterward. The ruling by the court’s conservative majority is a sharp reversal from April, when the Supreme Court allowed 80,000 late-arriving votes to be counted in Wisconsin’s primary.

Wisconsin voters can request a mail ballot until October 29, but it takes an average of 10 days to deliver a letter in Wisconsin because of Postal Service delays. The ruling could put tens of thousands of ballots at risk of being thrown out, given that 700,000 requested mail ballots have yet to returned. Trump won Wisconsin by 23,000 votes in 2016.

“The Court’s decision will disenfranchise large numbers of responsible voters in the midst of hazardous pandemic conditions,” Justice Elena Kagan wrote in her dissent.

But the ruling’s significance goes well beyond Wisconsin. In a chilling concurring opinion, Justice Brett Kavanaugh echoed President Trump’s rhetoric that ballots postmarked by Election Day but arriving afterward—which are legally required to be counted in at least 18 states—could lead to perceptions of voting malfeasance and signaled he might be prepared to throw out such ballots in any post-election dispute.

States that require ballots to be received by Election Day “want to avoid the chaos and suspicions of impropriety that can ensue if thousands of absentee ballots flow in after election day and potentially flip the results of an election,” Kavanaugh wrote. “And those States also want to be able to definitively announce the results of the election on election night, or as soon as possible thereafter.”

Kavanagh’s ruling, which no other justice joined, was released at nearly the exact same time Trump tweeted: “Big problems and discrepancies with Mail In Ballots all over the USA. Must have final total on November 3rd.”

Kagan sharply responded to Kavanaugh’s assertion that “suspicions of impropriety” would result if mail ballots changed the result of the election. “There are no results to ‘flip’ until all valid votes are counted,” she wrote. “And nothing could be more ‘suspicio[us]’ or ‘improp[er]’ than refusing to tally votes once the clock strikes 12 on election night. To suggest otherwise, especially in these fractious times, is to disserve the electoral process.” Some key swing states, such as Pennsylvania, Wisconsin, and Michigan, have said that the winner of their states will not be known on election night, largely because the Republican-controlled legislatures have refused to allow election officials to begin counting ballots before Election Day.

Trump has openly admitted that he wanted Barrett confirmed before the election so that she could provide the decisive vote for him in any post-election dispute over the counting of mail ballots, in a repeat of Bush v. Gore. The opinion by Kavanaugh, who may now be the swing justice on a court with a 6-3 conservative majority, makes such a doomsday scenario far more likely.

Indeed, Kavanaugh cited Bush v. Gore in his opinion, in particular a controversial section by then-Chief Justice William Rehnquist joined by only two other justices saying that the authority of state legislatures should supersede the rulings of state courts. (Kavanaugh, Roberts, and Barrett all worked on the Florida 2000 recount for George W. Bush.) This matters greatly because last week, the Supreme Court deadlocked 4-4 on whether to overturn a Pennsylvania Supreme Court ruling giving voters until the Friday after the election to return their ballots as long as they were sent by Election Day.

Pennsylvania Republicans have asked the US Supreme Court to reconsider the case before the election with Barrett seated. Even if the court declines to rehear the case before the election, Trump could try to challenge the legality of late-arriving ballots after the election and ask the court to throw them out. That could make the difference in a close election. Kavanaugh’s ruling is a green light for Trump to contest the results of the election and sends a disturbing signal about the willingness of a conservative-dominated Supreme Court to once again install a GOP president.