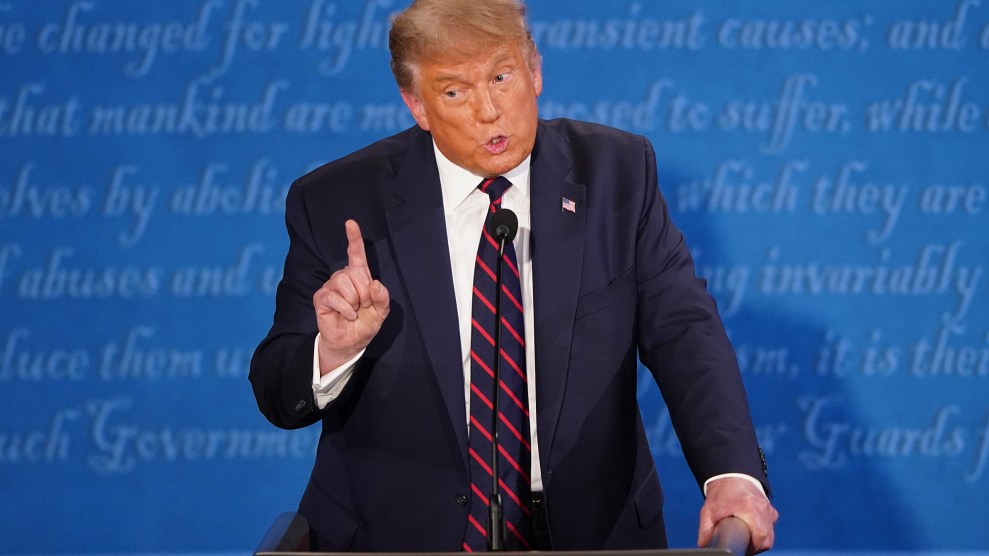 “It’s not on the ballot; there is nothing happening there,” blustered President Donald Trump Tuesday night during the first presidential debate of 2020. “You don’t know her view on Roe v. Wade.”

He’s simultaneously talking about the precarity of the right to abortion in the United States following his nomination of conservative judge Amy Coney Barrett to the Supreme Court, while insisting, of course, that it’s not precarious at all. It’s fine! Everything is totally fine!

Just a day earlier, in Iowa, Republican Sen. Joni Ernst offered a similar assurance, that we shouldn’t worry about reproductive autonomy, insisting during a debate against her Democratic challenger that the likelihood Roe will be overturned is “very minimal.” In a way, she’s probably right—even with the addition of Barrett to the court, it’s hard to imagine a scenario where Roe is overturned outright. An arguably worse or just-as-bad reality is more probable, as states will continue to offer up opportunities to chip away at the right to abortion care and the majority-conservative bench will try to maintain some semblance of precedent-respecting decorum in the process of ruling on those cases.

This sort of evasion from Republicans seems to be new, and it is deeply patronizing at best, bold-faced lying at worst. It has a certain “don’t you worry your pretty little head” tone to it, especially since the loss of abortion rights at the federal level will, of course, primarily affect people with uteruses. But it’s also extremely contradictory coming from a man who has enjoyed calling himself “the most pro-life president” in American history and has pledged over and over again to do whatever he can to overturn Roe. In a 2016 debate against Hillary Clinton, he said that as president, he would appoint judges to the Supreme Court with the explicit goal of decimating Roe. Just on Sunday, he mused to “Fox and Friends Weekend” that it is “possible” Barrett would overturn Roe as a Supreme Court Justice.

While we’re not quite yet at a trend, I bet we see more of this. After all, it’s not altogether surprising that Republicans who desperately want to see Barrett confirmed to the bench, come what may in November, are waffling on this particular point now that Election Day is creeping ever closer. Both Trump and Ernst are certainly feeling the heat in their own races. And polling has consistently shown that the majority of Americans believe abortion should be legal. The most recent major poll on the subject from the Pew Research Center last year showed 61 percent of Americans continue to say that abortion should be legal in all (27 percent) or most (34 percent) cases. A major policy change on this front could mobilize Democrats in a significant way—and really, it already has to some degree—and it could spark a backlash that would cause Republicans to lose their grip on the Senate and further reduce their numbers in the House come November.

In some ways, while odious, I at least prefer the honesty on this from someone like Missouri Republican Sen. Josh Hawley, who apparently did not get the party memo. A few hours before the presidential debate, the senator, who has in the past pledged to only support anti-Roe SCOTUS nominees, called Barrett’s judicial record “awfully clear” regarding abortion. “I think that’s one where she meets my standard of having evidence in the record, out there in public, on the record that indicates that she understands Roe was really an act of judicial imperialism and wrongly decided,” Hawley said. At least he’s consistent?

For now, voters will have to try and not lose their grip on reality amid all the gaslighting and backpedaling to see the stakes clearly.