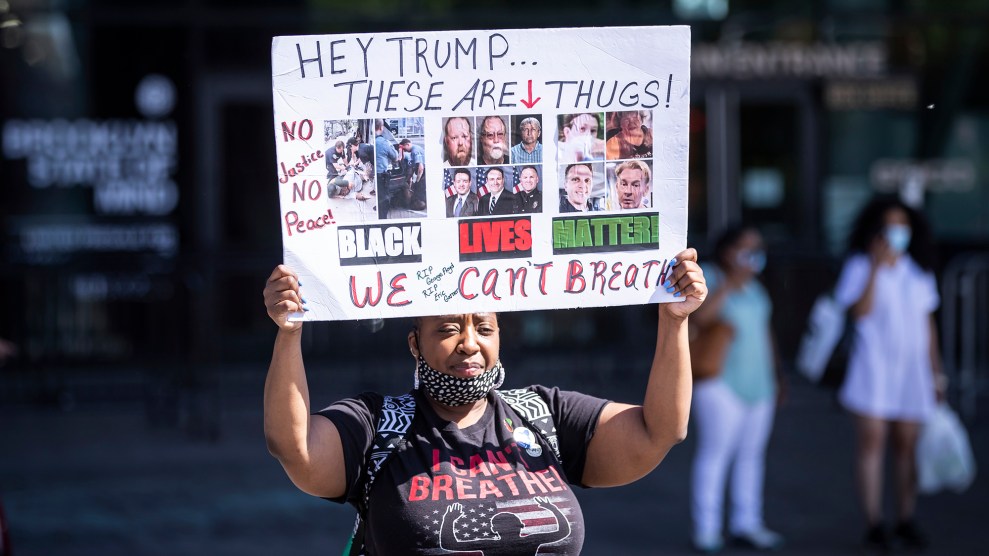 Before nationwide protests over police violence began last week, Trump’s 2020 campaign was a little lost. The job losses following the coronavirus had wiped out its plans to brag about the economy, and it was struggling to find an effective attack on Joe Biden. Now, the campaign has embraced a new tactic: run against the mob.

On Facebook, the Trump campaign is running ads that portray the protests not as the largely peaceful movement against the unlawful deaths of black people at the hands of law enforcement that it is, but as violent hordes that must be put down.

“Dangerous MOBS of far-left groups are running through our streets and causing absolute mayhem,” the text of one ad running nationwide on the platform reads. “They are DESTROYING our cities and rioting—it’s absolute madness.” The ad goes on to point the finger at Antifa, a nebulous “anti-fascist” group known for punching Nazis and otherwise getting physical in response to white supremacist and neo-Nazi agitators. But the president uses the loosely defined group, whose use of violence is widely condemned on the left, as a boogyman to paint the peaceful demonstrators as violent and distract from the disturbing and documented violence perpetrated by some police officers on protesters and journalists. (On Monday, Twitter took down a supposed Antifa account urging violence when it discovered it was actually the work of a white supremacist group.) On Facebook, Trump’s campaign has made Antifa a key word in it ads this week.

When the protests began, President Donald Trump and his quickly team decided that the demonstrations were an opportunity to run a “law and order”-style campaign, as Richard Nixon did with success more than 50 years ago in another time of national turmoil. There are plenty of reasons to think this might not turn out the way it did then; to begin with, Trump is the incumbent, while Richard Nixon was not. Trump has been using Twitter, his favorite megaphone, to literally tweet the phrase “law and order” and blame Antifa for the protests. The campaign’s application of his message on Facebook gives it additional reach and scale.

The campaign has also decided to attempt to tarnish Biden—who leads in recent national and swing state polls—by associating him with the protesters. One ad now up on Facebook builds off of a news report that some Biden campaign staff had donated to a cash bail relief fund to aid protesters arrested in Minneapolis.

“Sleepy Joe Biden’s campaign is so RADICAL that they are working to get dangerous ANARCHISTS out of jail at the cost of Americans’ safety,” reads the text of one Facebook ad running nationwide, but with a higher concentration in some swing states such as Florida. “We can’t let them get away with this. THESE RIOTS MUST END.”

Meanwhile, the campaign is running a number of ads that feature former President Barack Obama with a variety of messages. Some portray Obama as a sinister force and flick at the made-up Obamagate scandal, a supposed plot by the Obama administration to derail Trump’ 2016 campaign that Trump himself has pushed. “Barack Obama and Joe Biden have been coming after President Trump since day one and it’s time we expose them for their lies,” reads the text on a number of ads featuring images of Obama overlaid with text saying “Stand Against President Obama.” As black protesters take to the streets, the ads pit Trump not against his actual opponent, Joe Biden, but his African American predecessor.

Another set of ads using Obama’s image acknowledge the former president’s popularity among Democrats, but seeks to drive a wedge between his supporters and Biden—particularly among men, according to Facebook targeting data. These ads show images of Obama looking dejected alongside text reading: “It took 355 days for Cheatin’ Obama to endorse Joe—it’s obvious that even he didn’t want his former VP to become the next President, or else he wouldn’t have waited until Joe was the last man standing—how pathetic.”

All together, the ads make up a messaging campaign that seeks to divide Democrats and engage the Republican base with fear and anger by feeding a belief that peaceful demonstrators are dangerous mobs. That’s the playbook, at least for now.