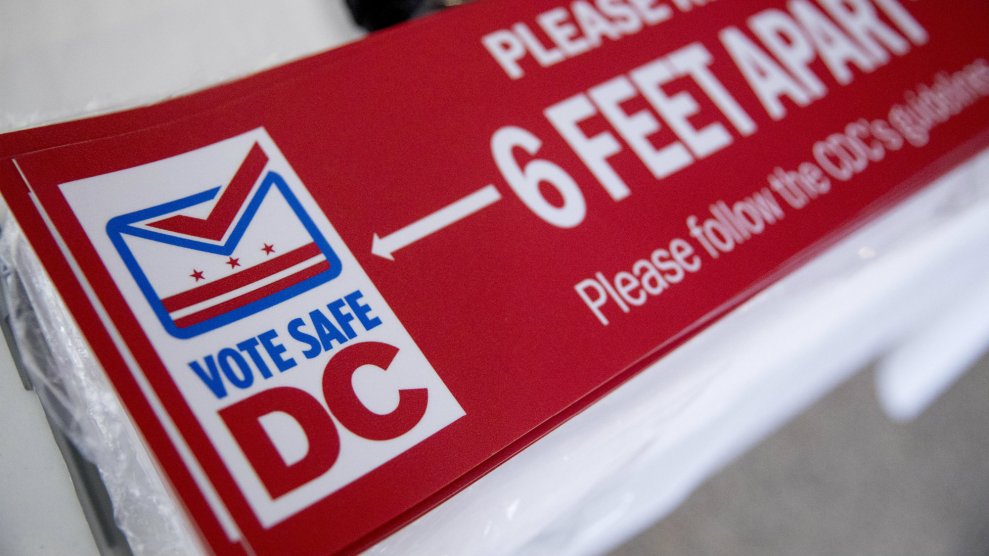 I’ve never had to wait more than 15 minutes to vote. In fact, I remember voting in the 2018 general election on my way to work. Of course, this election would pose some unprecedented logistical issues. There was an uprising sweeping the country and in response, Washington, DC, Mayor Muriel Bowser had imposed a strict curfew at 7:00 p.m.—though you were exempt if you were in line to vote when the polls closed at 8:00 p.m.

Then there was the pandemic that was still very much ravaging the city, where 473 people had died, more than 9,000 had been infected, and new cases were being reported every day. In the last three months, I haven’t been anywhere except the grocery store, the pharmacy, and the hardware store. In each of those forays, it’s taken me much longer than 15 minutes to gather my items, wait in a socially distanced line, pay the cashier, and head home. Voting was definitely going to be speedier and a lower-risk than a trip to the grocery store, I naively thought. So my husband and I washed our hands, put on masks, got in the car, and drove off to a nearby polling place to vote in DC’s Ward 4 primary.

We arrived at 6:45 p.m. It would be well after midnight before we got home.

The disaster that was voting in DC on Tuesday somehow embodies the ironies and agonies the entire country is experiencing right now. When the novel coronavirus began spreading in the United States, the federal government abdicated responsibility and local governments were left scrambling to figure out how to respond. More than 100,000 people have died—though the real number is likely much higher—and people of color have been disproportionately affected by the disease.  Plus, the virus has also created mass economic devastation, with over 40 million people unemployed.

Then, as you may have noticed, 2020 is an election year. Many states have pushed back their elections and tried to expand mail-in voting, but there were reports of hours-long lines and difficulties in getting ballots to those who had requested them. After two months of varying degrees of lockdown, in the last few weeks states began lifting restrictions and people have returned to work and social life with so little guidance that everyone takes out their frustration at others for not following the rules that we’ve been forced to invent on our own.

On Memorial Day, George Floyd, a Black man in Minneapolis, was killed by a white police officer. For nearly nine minutes Derek Chauvin kneeled on Floyd’s neck as witnesses recorded the incident begged him to stop. Floyd was not the first Black person killed by police on video, and he won’t be the last, but his death sparked both massive peaceful protests and massive unrest in Minneapolis which spread through the country including to Washington, DC. In Minneapolis, they burned down a police station. In Washington, DC, and other cities, some protesters broke windows and stole items from luxury stores to delis.

Unlike coronavirus or the systemic racism that’s been plaguing the country for centuries, there was a quick official response. The federal government called in every branch of police and military to police the streets of DC. They gassed peaceful protesters so the president could awkwardly take a picture in front of a church while clutching a Bible. Across the country, militarized police attacked demonstrators even if they were peacefully protesting. The government responded swiftly and quickly to mass unrest.

But I can’t even cast a ballot without having to wait six hours.

In a very long line to vote 10 minutes before curfew. pic.twitter.com/CogAtxfQKG

In heavily blue Washington, DC, the primary election can sometimes be more important than the general in November. With hardly any registered Republicans in the city, whoever is on the ballot in the general is almost guaranteed a win. When we got in line to vote, several people informed  us that if you had requested an absentee ballot that hadn’t arrived in time (which is what happened to my husband), you could go on Twitter, request an email ballot, fill it out and return it. But that process had to be completed by 8:00 p.m.—which incidentally was an hour after the curfew—so they advised staying in line in case the ballot didn’t come through in time. The woman behind me had her young son with her and didn’t want to wait hours with him. But she also didn’t have Twitter. I was not within earshot of anyone who successfully got a ballot via email and left.

90 minutes later we successfully inched up the street.

90 minutes later and we’ve made it around one corner but there’s still so mich more to go. 🥴 pic.twitter.com/tkk83mkrmT

No one I talked to could ever recall waiting in a line this long to vote in DC. We reminisced about the good old days of strolling into the voting precinct on our lunch breaks, casting our ballots, getting our stickers, and going back to work or home. It was past curfew, and we were a couple of blocks away from a police precinct but no one appeared to be enforcing it. Families walked down the street with strollers, masked teenagers teased each other on a corner, and a group of men laughed in a nearby park.

Several people drove by and told us that they had waited six hours to vote.

Been waiting in line to vote for 3.5 hours. Several people drove by and said they waited for 6 total. The line nervously chuckled like “wait…what?” 🥴 pic.twitter.com/Ym9OR3ShN2

We all laughed nervously. There was no way we’d be out here for six hours! But we didn’t reach the social distancing markers until 11:00 p.m. “This is how far back they thought the line would be?” we all said incredulously. The line had wrapped around almost the entire block.

After more than 4 hours in line we’ve finally reached the social distancing markers, leading me to believe they did NOT anticipate this crowd pic.twitter.com/71ZLmOrudg

At 11:30 p.m., I saw a tweet from a local reporter. The DC Board of Election was blaming the debacle on…the fact that people wanted to actually vote on election day! “The bad news is everyone decided to vote on the last day that vote centers are open and they decided to do it in person, and that just created an incredible logjam,” DC election board chair Michael Bennett told the Washington Post. He said he wasn’t trying to blame anyone, the city just wasn’t equipped to handle this. DC closed polling centers, made a mess of sending out ballots to people who did not want to risk their lives to vote, and imposed a curfew that caused widespread confusion about going out to vote. Clearly, it was very difficult to get organized.

But just the day before, we watched the supreme organizational savvy of Washington, DC police officers as they surrounded the home of Rahul Dubey, who had let in 70 peaceful protesters after they were pepper sprayed and threatened with arrest. So, we can mobilize a massive police response to anti-police brutality protests, but we can’t run smooth elections? “LOL, literally nothing in this country works!” I posted half-jokingly to my Instagram Story.

At midnight, we reached the front door of the voting precinct. “Happy Wednesday!” I yelled to my line buddies. We laughed at the absurdity of technically voting the day after election day. Inside the precinct, the workers were exhausted. “I know you’ve been waiting a long time,” the man who checked me in said. He was behind plexiglass, wearing gloves and a mask—a reminder that we’re still in a pandemic. “Have you ever waited in line that long?” the ballot clerk asked me. “We’ve been here since 6:00 a.m.” I finally left the polling place nearly six hours after I arrived.

12:21 and we finally voted and there are still people waiting pic.twitter.com/ZKhMgpYgkU

Aside from the massive inconvenience, it dawned on me that this was the longest time I’d been out in public since mid-March. The weather was warm and beautiful. A pre-teen girl kept us all entertained with jokes. Campaign staff for the candidates passed out snacks and water. I saw a very large rat. People in cars honked their support and shouted “Black Lives Matter!” as they whizzed by. And the camaraderie among all of us who were determined to vote gave the event a festive feel. It almost felt normal: In the midst of the most turmoil any of us have ever had to cope with—any of our parents and possibly our grandparents had to cope with—at least we still had the ability to connect with other humans. And even though our democracy was feeling under assault all the time, we still were determined to vote.

After we left the polling place, instead of going home we broke curfew, and drove a few minutes across state lines into Maryland for some Wendy’s burgers and french fries. Once at home, we sat on our couch and devoured our feast. I woke up Wednesday morning feeling more optimistic than I had in months.